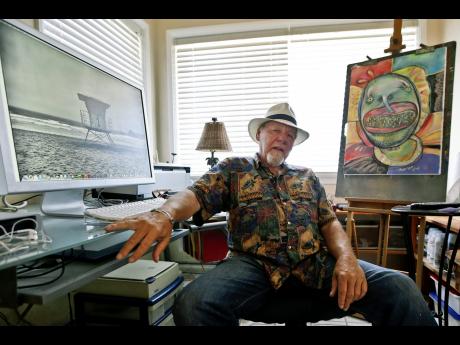 AP
In this July 16, 2014 file photo, artist Michael Gross sits in his studio between one of his paintings and one of his photos on his computer screen in Oceanside, California.

Michael C. Gross, an artist, illustrator, film producer and personal designer who created two of the most iconic pop culture images of the 20th century the enduring Ghostbusters logo and a dog with a gun to its head for the cover of National Lampoon magazine has died of cancer at age 70.

The artist, who had survived cancer 30 years before he was given a terminal diagnosis in 2014, said he decided to forgo any life-extending efforts. Instead, he told the AP following the diagnosis that he would "go down fighting" and launched a darkly comic anti-cancer campaign.

Gross solicited dozens of paintings and drawings from fellow artists and created some of his own, each featuring a hand with a raised middle finger. Underneath them he put the words 'Flip Cancer'.

He put the works, done in various media, on display at a gallery exhibition last year. At the time of his death, he was making plans to auction them and donate the money to cancer research.

It was the type of stunt that marked key points in the career of the artist who once described his life's goal as a quest "to have fun and do new things".

In 1973, he was art director for National Lampoon when he put a frightened-looking dog on the cover with a gun to its head and the words, 'If You Don't Buy This Magazine, We'll Kill This Dog'.

"We were just going to do it as a subscription ad in the magazine," he told the AP. "Then we thought the next one would be, 'OK, we killed the dog. Now we're going to kill the cat. We really mean it'."

When he learned the magazine was planning an entire issue making fun of death, the dog was promoted to the cover. In 2005, the American Society of Magazine Editors rated it one of the 40 greatest covers of all time.

For the first Ghostbusters film in 1984, Gross created the drawing of the confused-looking spirit caught in the middle of a red circle with a slash through it. It has come to be a ubiquitous symbol in American pop culture.

The logo placed first, beating out the Chrysler Building, when the prestigious Pratt Institute held a 125th anniversary celebration in 2012 and surveyed people for their thoughts on the 125 most admired icons created by its alumni and faculty.

Born October 4, 1945, Michael Curtiss Gross grew up in the Hudson River town of Newburgh, New York. As a child he began publishing his own fan magazines and making home movies with friends.

Unable to decide which career to pursue, he attended Pratt, where he majored in fine art and eventually drifted towards illustration. After working for National Lampoon, Esquire and other publications, he became John Lennon's personal designer. He also worked as a senior designer for the 1968 Olympics.

A prolific artist, his work ranged from animation to comic strips to political cartoons to abstract expressionist paintings. Various examples of it have been displayed in New York's Museum of Modern Art, Switzerland's Olympic Museum and other institutions.

His son recalled a childhood growing up in the company of such figures as Andy Warhol, Truman Capote and John Belushi.

"THAT'S WHERE I PAINT"

Belushi, Dan Aykroyd and other friends Gross had made in New York encouraged him to come along when they began moving to Los Angeles to make movies in the 1980s.

His first movie credit, as associate producer, was for Heavy Metal, the 1981 cult film that merged animation with science fiction, sex and blaring rock music.

From there he would go on to produce nearly a dozen films, including Twins, Kindergarten Cop, Legal Eagles and both of the Ghostbusters movies.

Twenty years ago he retired to a small beach house in the San Diego suburb of Oceanside.

"That's where I paint, I photograph and I do things like this," he said of the 'Flip Cancer' campaign last year. "I don't work very hard."

He remained active, however, until his final days, posting regularly on Facebook until last week and attending last month's Geekie Awards, a light-hearted annual Hollywood affair honouring geek art. There, he received a lifetime achievement award.

In addition to his son, he is survived by a daughter, Gina Misiroglu, and three grandchildren.