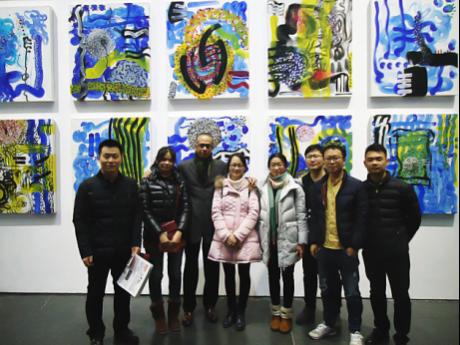 Peter Wayne Lewis (third left), a Jamaican professor at the Massachusetts College of Art and Design, shares lens time with these art enthusiasts. The occasion was his recent art exhibition at the Ullens Center for Contemporary Art in Beijing, China.

Drawing inspiration from his Jamaican parents and grandparents, the vibrant colours of the Caribbean, jazz, quantum physics, and the spiritual teachings of Christianity, Buddhism, and Hinduism, Peter Wayne Lewis stunned art enthusiasts during his recent exhibition in Beijing.

Jamaican artist extraordinaire Peter Wayne Lewis was on hand at the Ullens Center for Contemporary Art (UCCA) to give Caribbean dignitaries an exclusive tour of his latest works on display in the heart of Beijing's art district.

Fay Pickersgill lauded Lewis' work and commended his commitment to promoting Jamaica and the Caribbean. Chandradath Singh from the Republic of Trinidad and Tobago; Paul Gomez of the Commonwealth of the Bahamas; Denis Antoine of Grenada; and Dr Chelston Brathwaite of Barbados were also in attendance.

Lewis' multimillion-dollar pieces were shown alongside the works of the late Frederick J. Brown, the first American artist who was granted permission to exhibit at the National Museum of China in 1988. Brown was a friend of Lewis for 20 years and Lewis felt it his duty to remind Beijing of the historic nature of Brown's work and his relationship to the city.

Lewis' effervescent pieces incorporate elements of avant-garde jazz as well as Caribbean, European, African, Chinese, and Japanese music. Indicative in his work is a rhythmic element, stemming from his passion for music, and his respect for dissonance, space, and even silence. Lewis credits Jamaica and the Caribbean as being significant contributors to his work.

"The biggest influence about living in the Caribbean are the colours, the texture, the light, the people and the conversations you have; all ripple through my body and come out in my work, which really reflect my beginnings," notes Lewis.

This renowned artist has exhibited in several of the world's greatest cities, including London, Beijing, Berlin, New York, and Tokyo. Lewis remarked that his ability to exhibit in Beijing is by far one of his most important and greatest accomplishments, one that took approximately 10 years to achieve.

"As you know, thousands of Hakka people from China migrated to Jamaica in 1854. These people are a part of what makes Jamaica what it is and is a part of who I am. Coming to China is like coming back home. I have been to West Africa, Germany, France, and other places. As a human being, it is important to travel and experience our collective humanity," said an enthusiastic Lewis.

The exhibition consists of 15 paintings; however, this is the first time that 'Monk Time Suite' and 'Buddha Plays Monk' have been on display publicly. Lewis further notes the role each individual plays in his work.

"This is my humble attempt to try and understand what the world is ... this is my way of documenting the journey. This is reality, it is not abstract. The completion [of each piece] starts with you; it is a conversation; it is what we do as human beings. It's a dialogue."

Born in Jamaica in 1953, Lewis migrated to the United States as a child in 1962. He spent 30 years in California before taking up his current position as a professor at the Massachusetts College of Art and Design.