Jamaican student made mayor for the day in New Jersey 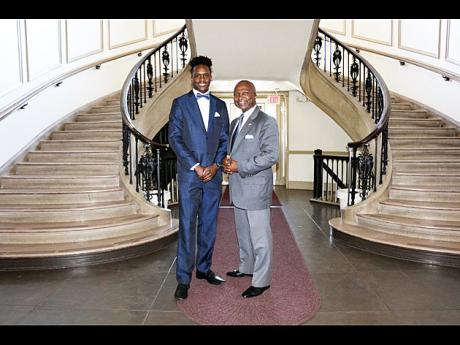 A Jamaican student, Savion Wilson, 17, was recently named mayor for a day in the New Jersey city of Plainfield.

Savion Wilson, an Academy for the Arts and Advanced Studies (FAAAS) student, on March 23, stepped into the shoes of Plainfield Mayor Adrian O. Mapp and took over the duties at City Hall for the day.

Wilson, a college-bound tennis player, was one of the students taking part in the Plainfield Public Schools' "Mayor for a Day" programme; he was chosen by school administrators to be the mayor.

The programme, sponsored by the Plainfield Mayor's Office and the Plainfield Public School District, gives students the opportunity to visit City Hall, where they spent the day shadowing city administrators and getting a glimpse of how city government works. Attending the programme with Wilson were fellow FAAAS students Katherine Rivera and Jordan Harris; Rafiya Smith and Derrick Moreno from the Barack Obama Academy for Academic and Civic Development and Jams Perez and Yaneth Portillo from Plainfield High School.

"Anyone of you can be the mayor of this city, a US senator, a legislator in Trenton," Mayor Mapp told the students at a gathering. "The sky is the limit , and I want you to know that."

As mayor, Wilson had the opportunity to speak with Mapp about pressing issues affecting students such as crime, a student walkout to protest school budget cuts, and education.

Savion was born in Brooklyn, New York. Both his parents, Denise and Sherwin Wilson, are from Falmouth, Trelawny. Wilson said that he likes to spend his summer holidays in Jamaica, visiting with relatives and friends.

"He is one of two sons, and his recent accomplishment as mayor for a day has made me very proud," his mother told Arts & Education. Similar sentiments were expressed by his father, who said Savion was is in the process of sorting out college offers and making final decisions to begin studies this fall. His course subjects currently include music theory and analysis and vocal music studio. He says that he loves mathematics and he plans to study computer science and cyber security while attending college.