Japan hands over Calculation Time Booklets to Government of Jamaica 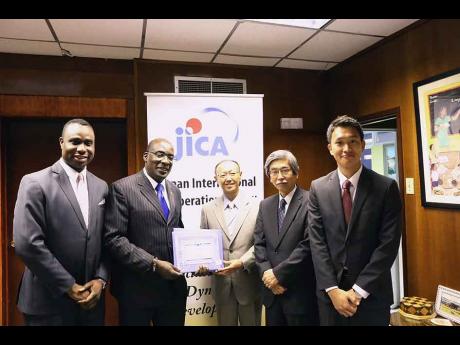 The Japanese government handed over Calculation Time booklets to the Ministry of Education. these booklets will be used across schools in Jamaica that have implemented the Calculation Time Programme during the 2017-2018 academic year.

With funding support provided by the Japan International Co-operation Agency in the amount of J$130 million, samples of the booklets were handed over to Ruel Reid, minister of education, youth and information by Kenji Tobita, resident representative of the Japan International Co-operation Agency (JICA), and Ambassador of Japan to Jamaica, Masanori Nakano.

Minister Reid expressed gratitude to Ambassador Nakano, The Embassy of Japan as well as to JICA on behalf of the Government of Jamaica. he said that his Government would continue the legacy of strengthening the Calculation Time Programme by calibrating the methodologies and finding the solution to take the mystique out of math and modify methods to see how best math at all levels could be improved.

Ambassador Nakano said that in the area of Mathematics Education, the Embassy of Japan, JICA, as well as the Marubeni Corporation have been working together or independently under the "ALL-JAPAN" banner in consistently providing tangible support to the people and Government of Jamaica.

In March 2017, the Marubeni Corporation provided sponsorship to 15 Jamaican schools participating in the Calculation Time Programme. Each school received J$100,000 to purchase learning resources and equipment aimed at improving the teaching and learning processes of mathematics.

"Japan, as a long-standing development partner, will continue to provide its support towards Jamaica's efforts to achieve continued growth and sustainable development through the Official Development Assistance, which includes grant and loan assistance, technical cooperation, and JOCV volunteers activities," said Ambassador Nakano.

Ever since its inception six years ago by a Japanese math teacher, Yuichi Tsukasaki, the Calculation Time Project has been included in the official curriculum of Jamaica. It continues to be strengthened through the additional work of subsequent volunteers, Miwako Suguwara, who was in Jamaica between 2013-2015, and Kyoko Machida, who came here in 2015 and just left for Japan after completing her tenure. They were assigned to the Core Curriculum Unit of the Ministry of Education, Youth and Information as well as a current junior volunteer, Yutaro Furuta, who is currently based in Port Antonio, assigned to the Ministry of Education, Region two.