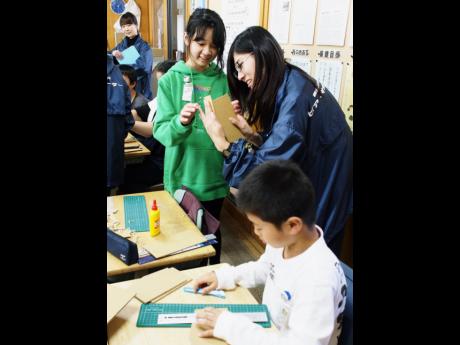 Starting this year, the Shichigo Elementary school in Sendai, located in northeastern Japan, will be looking to fully include aspects of disaster awareness in its curriculum.

It is the latest in a series of measures by the school to break down the information about preparing for natural disasters to children and their families and to develop a mindset of being able to help oneself and others in the event of a disaster.

Similar to the integrated learning approach, which is used in the Jamaican school system, students across grades one to six are introduced to different aspects of disaster awareness and preparation in different subject areas.

The third-largest public elementary school in Sendai, Shichigo, has 1,089 students on roll.

When journalists hosted under the Pacific-Caribbean Journalists' Program visited the school recently, grade one students were learning about some of the dangers that could come with an earthquake, identifying objects that could fall, move, or collapse.

Grade four students were learning how rice farmers, whose livelihood had been wiped out by the disaster, were able to rebuild their lives. Through a rice-planting project started in May, they will have hands-on experience.

"Other schools spend only one or two hours. we complete 10 to 15 hours in a cluster and compiled this to be used as disaster education," vice-principal Masaki Nakatsuji said.

This is for a total of 30 hours annually.

He says that the information is designed to fit each grade level and covers units like environmental and integrated studies.

But the campaign is also to pass on information directly to the children, their families, and communities to ensure that the devastation of the earthquake and tsunami which hit the island nation and took 20,000 lives in March 11, 2011, is not repeated.

Although it is no longer so designated, school leaders are continuing with the focus and looking to extend it even further.

"Students now keep a bosai (a hood made of flame-resistant material) - in their desk at school and are so versed in the disaster drill they often do not need to be guided by their teachers," Nakatsuji says.

Still, it is a model that pulls on the community for help.

On the day of our visit, the class included a craft session for grade five students who were tasked with a project to create memorial pieces, or ema, prayer boards usually hung at shrines for expressing one's hopes and prayers.

They were being supervised by students from the Tohoku Institute of Technology.

"These university students were elementary and junior high school students at the time, so the school invited them to share their memories," Nakatsuji informed.

He said that for young students especially, this information sharing is crucial as all the students who would have experienced the earthquake and tsunami have graduated from the school.

It is an approach that Kahoku Shimpo Publishings, Shinichi Takeda, has applauded: getting the information to people quickly and in a format they can find useful. Takeda heads the Disaster Reduction and Education project division of The Kahoku Shimpo, which is this region's most influential newspaper.

"I think the initiative is extremely important to teach children, by making the connection between home, school, and community," he says.

Last year, the local daily set up a disaster reduction and education project office in response to what it sees as the paper's dropping the ball on what should have been its duty to craft a substantive and sustained campaign to engage the community in learning how to help itself through a crisis or disaster.

This was confirmed by a readership study conducted after the 2011 earthquake and tsunami that showed a 72 per cent dissatisfaction with the usefulness of disaster information the paper provided.

"We did not have the backbone to save the lives of local people. So we decided to get the information for preparation for disaster to (the community) one by one," Takeda says. Reports are that some 20, 000 persons lost their lives.

Too many for a developed country, he implied.

Now, this designated office, through its team of 10 reporters and editors, organises once-per-month group talks with the community, including 15 lessons per year for students who are trained as memory keepers.

Far from overstepping its role, he says that the media have two important roles: helping communities prepare for disasters; and transmission and enlightenment.

He believes that the media must do whatever it can to reduce the impact of disasters.

Takeda says that the situation and the responsibility is too immense to simply leave it to governments to get things done.

He admits that with a budget of J$4.4 million (4 billion yen), it is not a profit-making venture, but one that is worth the investment.