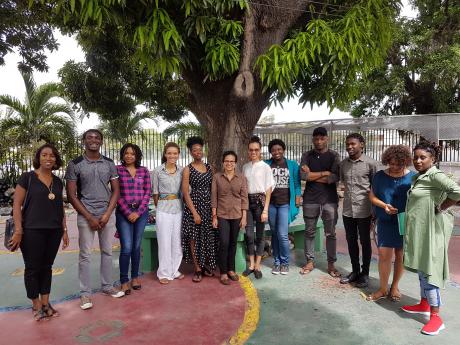 The British Council recently delivered Unwritten Poems, a project that invited emerging poets to respond to the Caribbean's engagement in the First World War. Even 100 years later, the region's contribution to the war effort is not well known or recognised.

On May 27, UK-based poets Karen McCarthy Woolf and Malika Booker hosted a workshop for young writers in Kingston.

The group visited the Jamaica Military Museum at Up Park Camp and worked with objects, memorabilia and material from the National Archives.

They then participated in two workshops at the National Library of Jamaica, and then a wider group of poets was invited to participate in the final workshop at Calabash on Saturday, June 2.

This reimagining of the shared history fused art, literature and archival resources and also provoked a larger question about how we bear witness to the world around us.

The workshop at Calabash was led by Karen McCarthy Woolf, Jay Bernard, Malika Booker and Ishion Hutchinson, who shared different ways in which poets bring research to life through the art and craft of poetic technique.

In a reciprocal staging later this year, selected Jamaican poets will attend the Contains Strong Language Literature Festival In Hull, the UK's City of Culture 2017. Finally, some poets will have the opportunity to be published in a collection of poems.

"Both sides learn and grow when we do this type of artistic exchange" shared Andrea Dempster-Chung, British Council arts project manager.

"The UK-based poets were inspired by the talent of our young poets, and the information that they found in our archives, and travelling to the UK to perform at a major international festival will, of course, be amazing exposure for our young poets. This project is a great example of how the British Council creates opportunities for artists, builds connections and makes a positive contribution to Jamaica."

The Unwritten Poems project was supported by six organisations: 14-18 Now, The BBC, the British Council, the Calabash International Literary Festival, Wrecking Ball Press and the National Library of Jamaica.