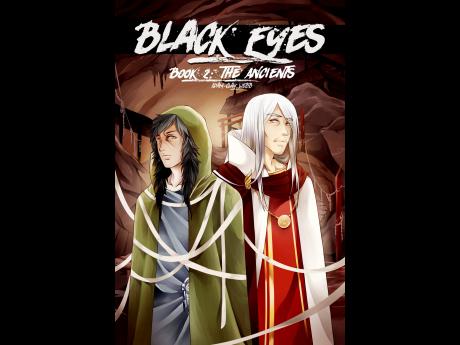 Novelist Adam Webb has released his second full-length book - Black Eyes Book 2: The Ancients. This is the sequel to Black Eyes Book 1: The Seventh Spirit, The Ancients which tells the story of a group of relentless warriors as they cope with the aftermath of the Black War.

According to Webb, Black Eyes will take readers through an emotional and fast-paced journey.

"It's easy to immerse yourself into Black Eyes, especially because it's fantasy-fiction," Webb said.

He said that fantasy is a genre largely untapped by Jamaican writers as those who write fiction tend to narrowly stick to themes that Jamaicans are already familiar with.

"I haven't seen many stories like Black Eyes on the Jamaican market," he said. "The beautiful thing about fantasy and action is that the possibilities are limitless. I've created an entirely new world just waiting to be explored, and the world will be expanding even further as I'm in the planning stages of the final installation in the trilogy."

He said that more Jamaican writers should branch out into the genre.

"I just wish more Jamaican writers would realise how engaging fantasy writing and reading can be. We've heard the same stories told a thousand times; it's time for some new ones," he said.

While teaching English at the York Castle High School, Webb said that he acquired a deeper understanding of what teen and young-adult readers want to experience while reading fantasy. This, he said, was a result of conversations he had with his students about their shared interests of anime and manga (a Japanese artform) and about stories that they found mutually captivating.

"Connecting with my students on a creative level was one of the most positive things to have happened to my writing career," said Webb. "I found that the key to keeping your readers hooked is to force them to become emotionally attached to the characters. Even amid the fantastical elements, there must be sense of relation and a sense of truth."

Webb, who now lives in Japan, where he is a full-time writer and English-conversation teacher, said he is inspired by "several lifetimes of video-gaming".

"Part of the reason for coming to Japan was to immerse myself more in some of the art forms that inspire the way my novels are written," he said. "I get inspiration for my characters and the situations they find themselves in from the people in my life and things that we have experienced. I've just transformed these people and situations into larger-than-life versions of themselves."

In Black Eyes Book 2, the lines between good and evil are blurred beyond recognition. Lex, the main character who carries over from Book 1, has a new journey. For him, it is no longer about merely becoming stronger and defeating enemies. He must discover truths that have been long buried by seeing through an intricate web of lies that has become known as history and prophecy.