France asks: Should ex-colonisers give back African art? 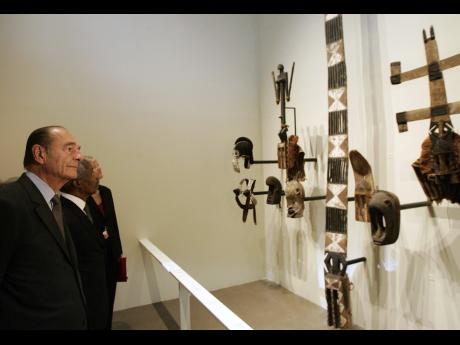 AP
In this Tuesday, November 28 , 2017 file photo French President Emmanuel Macron, centre, shake hands with children during a visit to a school in Ouagadougou, Burkina Faso. From Senegal to Ethiopia, artists, governments and museums are eagerly awaiting a report commissioned by French President Emmanuel Macron on how former colonizers can return African art to Africa.

From Senegal to Ethiopia, artists, governments, and museums are eagerly awaiting a report commissioned by French President Emmanuel Macron on how former colonisers can return African art to Africa.

The study by French art historian Benedicte Savoy and Senegalese economist Felwine Sarr, being presented to Macron on Friday in Paris, is expected to recommend that French museums give back works that were taken without consent if African countries request them. That could increase pressure on museums elsewhere in Europe to follow suit.

The experts estimate that up to 90 per cent of African art is outside the continent, including statues, thrones, and manuscripts. Tens of thousands of works are held by just one museum, the Quai Branly Museum in Paris, opened in 2006 to showcase non-European art much of it from former French colonies. The museum wouldn't comment ahead of the report's release.

The head of Ethiopia's Authority for Research and Conservation of Cultural Heritage, Yonas Desta, said the report shows "'a new era of thought" in Europe's relations with Africa. "I'm longing to see the final French report," he told The Associated Press.

Senegal's culture minister, Abdou Latif Coulibaly, said: "It's entirely logical that Africans should get back their artworks. ... These works were taken in conditions that were perhaps legitimate at the time but illegitimate today."

The report is just a first step. Challenges ahead include enforcing the report's recommendations, especially if museums resist, and determining how objects were obtained and who to give them to.

The report is part of broader promises by Macron to turn the page on France's troubled relationship with Africa. In a groundbreaking meeting with students in Burkina Faso last year, Macron stressed the "undeniable crimes of European colonisation" and said he wants pieces of African cultural heritage to return to Africa "temporarily or definitively".

"I cannot accept that a large part of African heritage is in France," he said at the time.

The French report could have broader repercussions. In Cameroon, professor Verkijika Fanso, historian at the University of Yaounde One, said: "France is feeling the heat of what others will face. Let their decision to bring back what is ours motivate others."

Germany has worked to return art seized by the Nazis, and in May, the organisation that coordinates that effort, the German Lost Art Foundation, said it was starting a programme to research the provenance of cultural objects collected during the country's colonial past.

Britain is also under pressure to return art taken from its former colonies.

In recent months, Ethiopian officials have increased efforts to secure the return of looted artefacts and manuscripts from museums, personal collections, and government institutions across Britain, including valuable items taken in the 1860s after battles in northern Ethiopia, Yonas said.

In Nigeria, a group of bronze casters over the years has strongly supported calls for the return of artefacts taken from the Palace of the Oba of Benin in 1897 when the British raided it. The group still uses their forefathers' centuries-old skills to produce bronze works in Igun Street, a UNESCO World Heritage Site.

Eric Osamudiamen Ogbemudia, secretary of the Igun Bronze Casters Union in Benin City, said: "It was never the intention of our fathers to give these works to the British. It is important that we get them back so as to see what our ancestors left behind."

Ogbemudia warned the new French report should not remain just a "recommendation merely to make Africans calm down. Let us see the action."