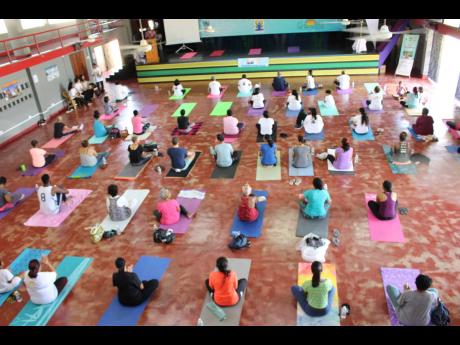 Contributed
Yoga practitioners and ethusiasts on their yoga mats at Campion College auditorium on Saturday 22, on the occasion of 5th International Yoga Day. 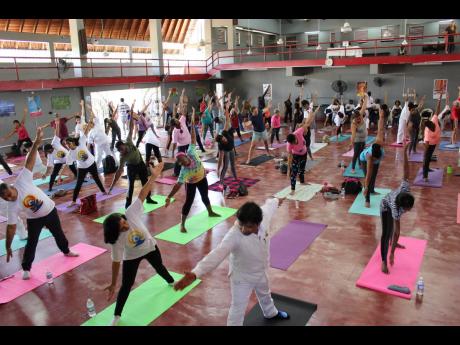 Contributed
Yoga practitioners and enthusiasts at Campion College auditorium on Saturday, June 22, on the occasion of the 5th International Yoga Day. 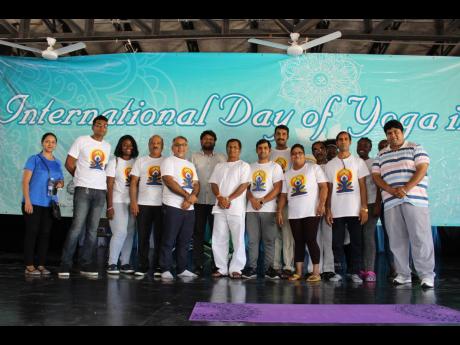 Contributed
High Commissioner of India to Jamaica M. Sevala Naik (middle) and Second Secretary at the High Commission Girish Juneja (fifth right) pose for a photograph with the staff of the high commission at the Campion College auditorium on Saturday 22, on the occasion of the 5th International Yoga Day. 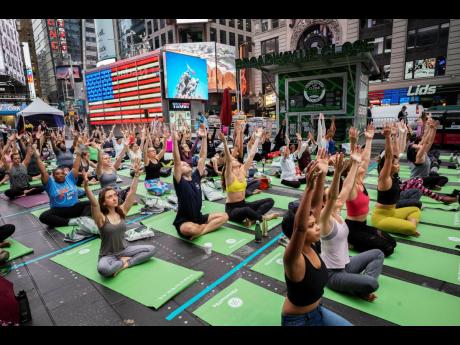 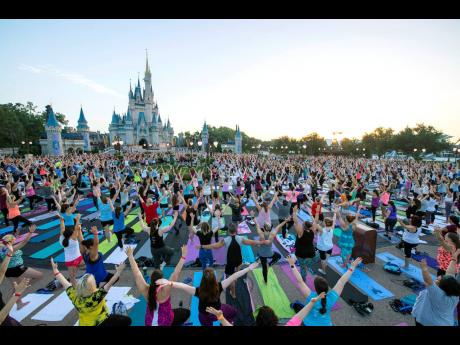 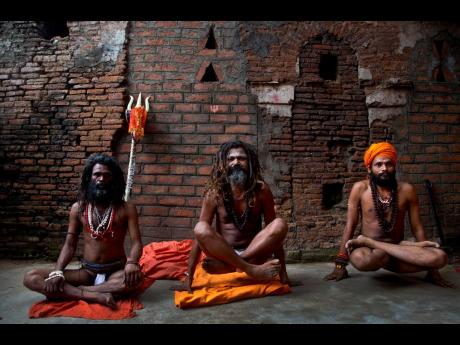 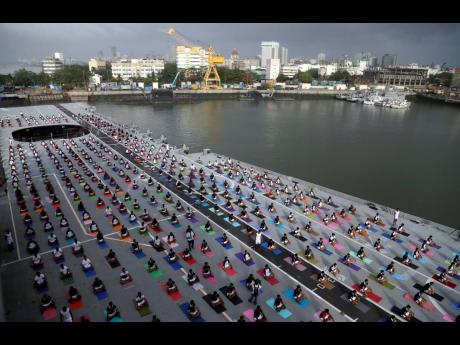 From an elevation, one could see mats lined on the floor at the Campion College auditorium, if one was to make the imagination take a hop skip and a jump – like colourful magical carpets ready to take-off, or for the gastronomically inclined, slices of cakes ready to satisfy someone’s palate.

Well, none of the above, the auditorium, on June 22, was the venue for the 5th International Yoga Day – organised by The High Commission of India, Kingston, in collaboration with The Art of Living Foundation.

Soon, the mats were occupied by yoga practitioners and enthusiasts alike ready to test the flexibility quotients of their bodies this Saturday morning.

The proceedings began with symbolic lighting of the lamp by the High Commissioner of India to Jamaica, M. Sevala Naik. Symbolically, light personifies positivity, dispelling darkness of ignorance, negativity, and the resultant glow of the flame (‘Tej’ or Glory), a reminder, that like a flame, one must rise above the negatives.

This year, the event was a day-long affair, beginning with yoga lessons by the resident yoga teacher at the High Commission of India, Gopal Sharma, and Sonita from Afya Yoga. There were dedicated Yoga sessions for children and adults – to generate interest and popularise the practice of yoga.

In 2014, the Government of India and Prime Minister Narendra Modi lobbied the United Nations to designate June 21 International Yoga Day in 2014.

In the last five years, the day has become synonymous with people coming together around the world to recognise this ancient Indian way of life.

Or as The Associated Press (AP) reported: “If China has panda diplomacy, India has yoga.”

“China, under President Xi Jinping, has given countries pandas for their zoos in a show of goodwill,” the AP article stated. “Modi has used one of India’s most popular exports to assert his nation’s rising place in the world.”

On June 21, the Indian prime minister led the commemoration, practising ‘asanas’ (poses or exercises) alongside an estimated 40,000 people in India’s eastern state of Jharkhand as members of his Cabinet and foreign envoys rolled out their yoga mats in cities around the world, The AP reported.

“Let our motto be yoga for peace, harmony, and progress,” Modi said.

Most of India’s 191 embassies and consulates worldwide organised yoga sessions to commemorate the day, according to the Indian Ministry of External Affairs – photos of yoga flash mobs on the streets of Kiev, colourful yoga mats around Brussels’ Triumphal Arch, sun salutations under the Washington Monument, hundreds in seated prayer pose at Moscow’s Tagansky Park, and more than 500 people in identical transparent ponchos and black pants in front of the Yellow Crane Tower in rainy Wuhan, China, reported The AP.

The practice of yoga originated almost 5,000 years ago. The discipline involves striking a balance and equilibrium between the mind and body. It is estimated that involving spiritual and physical practices is now a global phenomenon followed by about 300 million people worldwide.

In Kingston, the commemoration attracted around 300 people who attended yoga sessions conducted throughout the day.