Black history does not begin with slavery 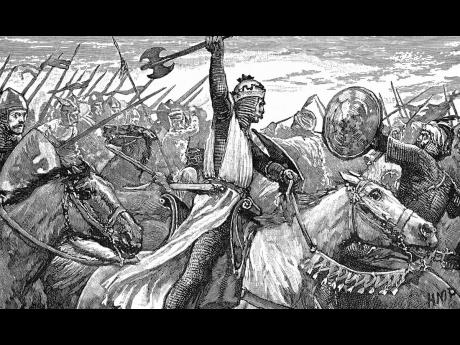 My first informal lessons in black history were as an infant sitting with my parents on Saturdays in the family room digesting a steady diet of North American adventure films starring white explorers in Africa encountering and defending themselves against uncivilised black cannibals living in the jungle.

This formative impression of black history was further reinforced in elementary school. We were taught at the ages of four to eight years old (at an institution of early-childhood development) that blacks were initially salves who endured hardships, until we were freed.

I continued through to secondary and high school, where our history class required occasional reference to a book called The Making of the West Indies by F.R. Augier.

This literature of learning documented the capturing, raping and murdering of African natives; their enslavement; and the transatlantic Triangular Trade journey with the brutal ‘middle passage’ where slaves who were still alive would be delivered to the Americas.

The Making of the West Indies also gave tribute (deservingly) to white abolitionists who fought for the freedom of slaves and the subsequent abolition of slavery.

Now, from our initial stage of cognitive reasoning through to our development of character, self-esteem, self-image, morals, values, pride, etc., one could imagine, based on selective information, what our perception of our black history and who we were as a people was.

Learning about the slave trade is an important part of our study of history. It gives us one important perspective of the struggles we endured and the sacrifices made by many to acquire freedom.

The fact is that black history began long before the slave trade of the 17th century.

During 711 AD, a group of black nomadic Muslims from North Africa living near the Mediterranean Sea invaded what is now known as Spain.

After submitting European territory to their political authority, they made no attempt to change the language or impose their culture. Instead, they allowed Christianity to continue to thrive, ushered in the renaissance of intellectual and technological advancement, and introduced a culture and civilisation in Sicily and Granada so rich and powerful that it became the envy of the world. These people became known as the Moors.

Europeans did not suffer under this black occupation the way Africans did under the European.

The Moors built the first university and made education free for all. They founded advanced medical schools and modernised Spain by paving roads and creating sidewalks and street lighting. They also built hundreds of public baths and created a corral separating the livestock from the living quarter of humans, significantly reducing the outbreak of various transmitted diseases.

Under the Moors’ rule, advancements were made in science, mathematics, geography, philosophy, and even agriculture; the Moors created floral gardens, air conditioning, heating, and water flow through pipes to homes. They established a formidable silk industry, and a famous African scholar by the name of Ziryab revolutionised the fashion industry by changing wardrobes four times according to the four seasons and taught the Europeans to serve dishes in several phases, ending with dessert.

The Europeans captured the knowledge from the Moors and exported it beyond Spain.

Fall and expulsion of the Moors from Europe

It is important to know that ‘Moor’ does not mean ‘black Muslim’. There were Christian Moors, as well as Muslim Moors. ‘Moor’ simply means ‘black’, and the terms ‘black’ and ‘Moor’ were used interchangeably throughout history.

Differences in religion and culture lead to numerous conflicts within the Christian kingdom of Europe. Propaganda sparked by a jealous crusade gave the Moors a barbaric image of dark-skinned savages.

The Catholic monarchy’s recapture of Sicily and the fall of Granada in 1492 marked the end of the Moors’ Muslim rule.

The monarchy began to destroy all evidence that the Moors were ever in Spain. Some 3.5 million Moors fled Spain and Portugal and returned to the continent of Africa. Some dispersed throughout Europe.

Archeologists have since uncovered artefacts revealing the hidden history and impact the Moors had in shaping Spain’s history and Europe overall.

A number of European coats of arms have an image of a Moor. The Moors converted the harp into the piano by turning it sideways and encasing it. If you look at the grand piano, you will see the distinct shape of the harp.Today, buildings and structures in Europe show the magnificent portrayal of the Moors’ architectural brilliance.

The cathedrals built in England are all influenced by the Moors’ architecture. Images of the Moor can even be seen on the labels of major European beverages and in the logos of prominent football teams.

Institutions of learning should re-educate students in black history and begin prior to the slave trade.

My appeal to schools worldwide, particularly in countries with a predominantly black populace, is to revise their history curriculum, incorporating the existence and advancements of the Moors.

The components of a person’s self-image and self-esteem are not only based on one’s family history; they are also based on their racial history.

A significant portion of a black child’s self-esteem is based on what they know or don’t know about their racial history.Students should be taught an accurate, balanced, and complete narrative of black history in order to become empowered with not only our struggles but our accomplishments.