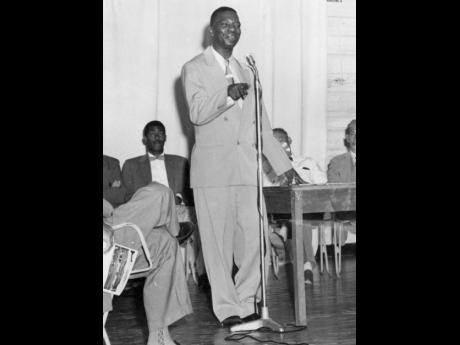 Gleaner Archives
Jonathan Grant, acting minister of Agriculture addressing the Summer School for Senior field officers of the Co-ordinated Extension services at the University College of the West Indies.

Last week, my article featured the People’s National Party’s (PNP) Cabinet ministers of 1955 and 1959 under Norman Washington Manley. I was particularly fascinated by Jonathan Grant. I know the name from the eponymous secondary school in St Catherine, but I did not know that Jonathan Grant was a politician. It was not easy to find information about him, not even in information about the school. I also cannot guarantee that all the information provided here is accurate, but this provides an opportunity for those who knew him to make corrections.

He would attend elementary school in St Catherine, but there is no indication of whether he went on to secondary school or to a teachers’ college. It is reported in The Gleaner that he was an assistant elementary school teacher from 1929-1934. He was also an insurance salesman and dry goods merchant, and maybe, had other jobs.

It appears that Jonathan Grant was an unsuccessful candidate in the 1944 election. In the January 1955 election, he was successful as the PNP’s candidate for the House of Representatives representing South Eastern St Catherine. In April 1959, Grant was hospitalised, requiring emergency surgery.

He recovered and again won his St. Catherine seat in the election of July 1959. He was appointed to the Cabinet as minister of labour.

He would lose his seat to the JLP’s Roy McNeil in the pre-independence general election of April 10, 1962. He would become ill shortly after and die on June 16, 1962, at age 48. He was another politician of this era who would die at a fairly young age. He was buried on June 20, 1962, in Spanish Town. On that day, the House paid tribute to him.

Leader of the Opposition, Norman Manley, said that Jonathan Grant was an outstanding example of how a man in Jamaica, from humble beginnings, could rise to great heights by virtue of his character, the purposes he served, and his sympathy for the small people, the working class. Jonathan Grant was commended for his service to his constituents and as minister of labour.

The Jonathan Grant High School in Spanish Town, named in his honour, was formally opened on October 6, 1980.