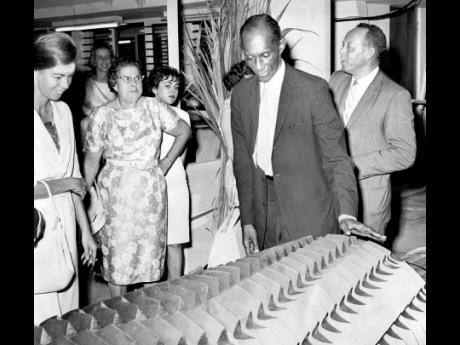 Gleaner Archives
In this 1963 photo then Minister of Trade and Industry, Robert Lightbourne visits a booth and examining a sugar-mill at the third Industrial Exhibition of the Jamaican Manufacturers’ Association at the National Stadium. The sugarmill roller was made by Kingston Industrial Works for export to Peru and was their exhibit at the fair.

Robert Charles Lightbourne (1909-1995) is credited with composing the music for Jamaica’s national anthem. He was a businessman (industrialist) and politician. I remember him as the debonair minister of trade and industry in the 1960s. His is a remarkable story. He is another of Jamaica’s noted figures whose expanded biography could be researched and written.

Lightbourne was born on November 29, 1909 at Mountpelier in St. Thomas, to planter and olitician, Robert Augustus Lightbourne (1873-1939), and his wife, Isabel Adelaide Bogle (1888-1959). His sister was the well-respected Hyacinth Lightbourne Maynier (1907-1956), a medical doctor. Robert Charles, known also as Bob, I am assuming, attended school at the elementary level in St. Thomas. It seems that he studied music, the piano, with Miss A. Carnegie passing exams of the Royal Academy of Music. He was a talented musician. In religion, he would be a life-long Anglican.

He attended Jamaica College and the Bishop Stortford School in England. In April 1930, the Gleaner records that Robert C. Lightbourne returned from England where he was studying law, with his wife, Elsie L. Lightbourne, and his mother, Isabel. He and Elsie would have 2 sons.

From 1930-1938, Lightbourne resided in St. Thomas where he was chairman of the Happy Grove School, a justice of the peace, and served, like his father, on the Parochial Board (the parish council).

In about October 1938, he returned to England and would remain there until the early 1950s. He went into business in the industrial city of Birmingham. He made use of patents for products which were in great demand during WWII. Through acquisition of shares, he became managing director of a factory known as Weldhall and Assembly and another, the Juney Iron and Steel Company. His business ventures seemed quite successful. This was a major achievement in Britain for a black man from a colony.

Lightbourne teamed up with fellow Jamaican, Morris Cargill, and they proposed to British members of parliament an industrial project for Jamaica which required an investment of £3 million. Lightbourne also invented a grass drying machine, which was demonstrated in Jamaica, and a unit given to the government.

It is reported that in the 1940s, Dorothy Hineman became his second wife with whom he also had 2 sons.

With Hurricane Charlie in August 1951, Lightbourne was active in assisting the relief effort for Jamaica. He had also assisted Norman Manley with Jamaica Welfare. Given his business experience in England and his interest in Jamaica’s development, in 1951, Governor, Sir Hugh Foote invited Lightbourne to become involved in Jamaica’s industrial development. He then relocated permanently to Jamaica.

Lightbourne was appointed managing director of the Industrial Development Corporation in 1952.

In 1958, he was elected to the West Indies Federal Parliament becoming deputy leader of the Opposition. By 1959, he had resigned his Federal seat and represented the Jamaica Labour Party in the constituency of St. Thomas Western in the 1959 national General Election. He won his seat, and was re-elected in 1962, when he was appointed to Alexander Bustamante’s Cabinet as Minister of Trade and Industry. The period from the 1950s up to 1972 saw significant economic growth in Jamaica driven by expansion of industry, investment, and trade.

Lightbourne resigned from the JLP after the 1972 General Election, which the Party lost. He represented St. Thomas Western as an Independent and later formed his short-lived United Party. In 1973, he married for the third time to Mrs. Felicity Ann Agnes Boorman. They would have a daughter named Hyacinth. By the 1980s, he had retired fully from politics.

In national honours, he was the first recipient of the Order of Jamaica for his contribution to Jamaica’s industrial development and his involvement in international sugar agreement negotiations.

My thanks to all who contributed to this article about this fascinating man. Question – Is Robert Lightbourne related to National Hero Paul Bogle, through his mother, Isabel Bogle?