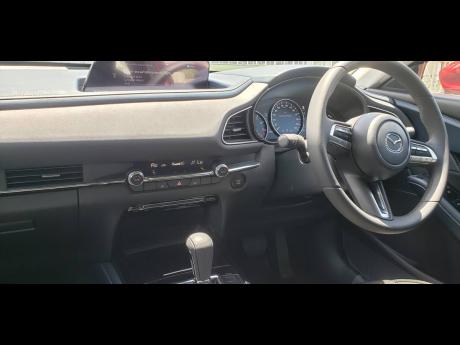 Kareem Latouche
The 2020 CX-30 has a well-crafted interior that is shared with the Mazda 3.

Mazda seems to be streamlining its models with a sleek silhouette to showcase uniformity on all platforms. This is most obvious with the bold nose, which has an underbelly outlined with chrome that extends to the circular LED headlights, which wrap around to the side panels.

The first thing that caught my attention was the Soul-Crystal-Red painting, which has a rich and glimmering look that makes it stand out wherever it is driven. In addition, from the side, the vehicle is slightly tilted towards the front to give it a racy look. There are also the 18” alloy rims, which help it to accomplish a ground clearance of 6.9 inches.

The inside is slightly different from the CX-5 as the passenger has additional A/C vents integrated in a horizontal strip along the dashboard. This is covered with Polly Metal Grey, leather, and black chrome, which wraps around the majority of the interior. The company tries to keep the inside clean and simple with as few buttons as possible. At the top of the dashboard, in the centre, is a protruding non-touch screen that can be controlled by a circular knob behind the gear lever.

It comes with eight speakers and a CD player, for nostalgic persons. To play music, I opted to select songs through Bluetooth via my cell phone. There is also the option to connect a device to one of the two USB ports at the front, one of which is in the storage bin below the sliding armrest, which, unfortunately, cannot be adjusted for height.

The dashboard takes on an angular shape with a protrusion to the front that runs up to the driver’s A/C vent. Aesthetically, it looks sophisticated but not intrusive as it provides ample leg space for the front passenger. The centre console consists of the temperature dials, which include dual climate-zone control. To change the fan speed, there are two buttons, which I would have preferred to be a knob. The good thing is, it gets cool easily as there are multiple A/C vents at the front, and to my surprise, there are rear A/C vents. This is noteworthy as many vehicles in this class don’t have this.

Space-wise, it can comfortably seat five persons without any compromise, and in the trunk, there are 20.2 cubic feet of space, which can easily carry multiple suitcases.

Like many compact crossover SUVs, this one has a high driving position, which helps with good all-round visibility. The steering column can also be adjusted for height and reach, and the seat can be adjusted in multiple ways to ensure that the driver is comfortable.

One area where Mazda never disappoints is with the Skyactiv engine, specifically the two-litre version, which can also be found in the CX-5. It has been out for several years now without any major hiccups. For me, this is always crucial as many carmakers design engines that only last for a year or two before becoming problem magnets.

The engine is paired with a six-speed automatic transmission that has the tendency to stay in a higher gear to preserve gas. However, there is a Sport toggle, located beside the gear lever, that gives it a more aggressive performance. There is also a manual gear-control system, activated by selecting drive mode and moving the lever to the right. This will allow the driver to have more control over the transmission. Whenever I wanted to overtake a vehicle, I would gear down for maximum power then move off.

The suspension feels sturdy and keeps the vehicle stable when going around corners or swerving away from objects. The feel of the ride is on the sporty side, and it is quite easy to manoeuvre. The only thing I would adjust is the break, to make it a little more sensitive.

With the first-generation CX-30, Mazda wanted to make a statement, from the bold colour to the sporty architecture. It has done so in a powerful way as it replaces the CX-3 in the Jamaican market. The design is elegant with body paint that will stand out anywhere it is driven.

For views and comments, email yl.jamaica@gmail.com.