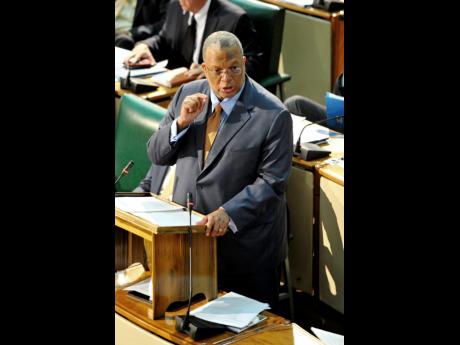 Minister of Finance and Planning Dr Peter Phillips described this year's budget as "groundbreaking" on Thursday.

However, the budget reflects none of the type of bold tax reforms contained in the Fiscal Incentives (Miscellaneous Provisions) Act 2013.

This budget serves the perfunctory purpose of filling the revenue deficit by an almost complete reliance on consumption taxes. There are some additional measures directed at life insurance companies, in an effort to address existing corporate income tax anomalies.

There are also the usual compliance measures, which, while not revenue generating, are necessary to address the age-old problem of low tax compliance.

The proposed increases in consumption taxes account for some $10.49 billion in revenue, which is more than 99 per cent of the projected receipts from the new revenue measures for the 2015-16 financial year.

Tax expenditure through revenue foregone for 2015/16 is projected to be $645 million.

To cushion the effects on the disposable income of the average consumer, Minister Phillips also announced that there will be an increase in the general personal income tax threshold. He has also assured consumers that the biggest increase in their consumption taxes will be used to insure all consumers against any sharp increases in global oil prices in the future.

The clear emphasis on taxing consumption seems to be less about advancing the tax-reform agenda and more about tapping into the more reliable sources of revenue.

This consumption tax focus will result in a significant increase in the consumption tax imposed on petroleum products while, at the same time, some residential consumers will again be paying a tax on their electricity consumption.

Consumers will also have an additional tax on cigarette purchases. What is new on the list is an environmental levy which will be imposed on the consumption of goods manufactured locally and on the importation of goods from other Caricom countries.

Although the last upward adjustment to this rate was effected in January 2010, the Government's return to the tobacco industry for additional tax revenue indicates that this may be a reliable tax revenue earner. The increased cost of cigarettes may not negatively impact sales and, consequently, increased tax collections may be achieved.

The petroleum cess paid by Petrojam to the Petroleum Corporation of Jamaica (PCJ) will be replaced by a specific SCT of $2 per litre.

The finance minister insisted that the implementation of the measure would not impact Petrojam's reference billing prices for petroleum products. The expectation, however, is that this cost will eventually be passed on to the final consumer at the pumps. If this expectation comes to fruition, this revenue measure, along with the increased SCT on petrol consumers, will result in a double hit to the consumer.

The Government's past efforts to impose GCT on residential use of electricity had met with strong opposition, resulting in the steady adjustment and ultimate withdrawal of the tax. It was first imposed in 2010 at a rate of 10 per cent for usage over 200kWh, then an increase to 16.5 per cent for usage over 300kWh was proposed in 2012, but this was not implemented and the tax was withdrawn that year.

The focus of this revenue measure is again on consumption patterns. As the country moves towards achieving a lower energy bill, part of the strategy of the Government of Jamaica is to reduce energy consumption.

The GCT on electricity for residential customers who consume more than 350kWh per month is a clear attempt at encouraging energy efficiency. The ministry paper also indicates that the measure is another effort to widen the tax net. This may not be achieved in light of the high rate of electricity theft in the island, and the burden of the cost may again fall at the feet of Jamaicans who are already in the tax net.

On the same effective date, it is proposed that the 0.5 per cent environmental levy also be applied to domestic supplies of goods. In this regard, the minister stated that the following will apply:

n The total value of the supplies sold quarterly is to be used as the tax base.

n Environmental levy is to be treated as an expense on the taxpayer's annual income tax return.

The minister indicated that the above measures were intended to better achieve impartiality in the application of the levy in keeping with World Trade Organization rules. Currently, no levy is being applied to Caricom imports or domestic goods.

From our analysis, the measures as a whole could result in increased costs to the consumer and additional revenues to the Government. They may not assist domestic producers in being more competitive in the marketplace as other non-tax factors contribute to inefficiencies in production.

The ministry paper states that the proposed change will be applicable for year of assessment which is 2015. If this is correct, the assets tax that is due on March 16, 2015, which is four days from today, will be at the reduced tax rate of 0.25 per cent.

The news may not be all good for life insurance companies. The minister announced that the Gross Premium Tax (3 per cent) and the Net Investment Income Tax (15 per cent) will be replaced by a new corporate income tax regime with an applicable tax rate of 25 per cent.

By the minister's own account, this will likely result in increased income tax to life insurance companies.

For all the talk of taxes on consumption, this may be the steeper provision in the budget. It is described as a compliance measure and has no revenue estimate associated with it. But it could be a big revenue raiser.

The proposal is to impose a 3 per cent withholding tax on payment for services above $50,000, effective May 1, 2015. Although the ministry papers refer to "specified services", no specific categories of services were stated. The tax would be an income tax, and the amount withheld would be creditable against the service provider's income tax liability. The credit would be available when the payer provides the service provider with a certificate showing the amount of tax withheld.

The plan is to phase in the withholding tax by limiting the payers who are required to withhold, to larger entities such as financial institutions, ministries/agencies/departments and utility companies.

These entities would be required to withhold 3 per cent from payments made to a service provider, who will be provided with a withholding tax certificate so that the service provider can claim the withheld tax as a credit against his normal income tax liability.

The finance minister indicated that the interim bauxite levy concession granted to members of the bauxite industry since 2008 expired in December 2014. He indicated that the full levy is now due and all bauxite companies are expected to "adhere to the law - both in letter and spirit".

The levy is due on a quarterly basis and must be paid by the 15th day of the month following the end of the quarter. This would mean that the first payment for 2015 could be due by April 15, 2015.