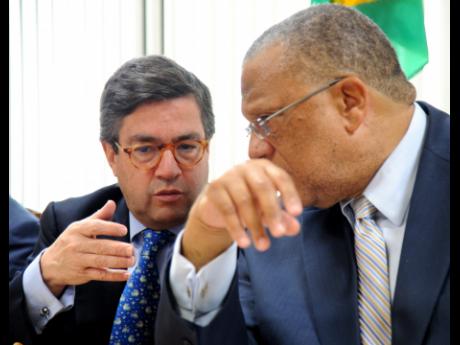 Ricardo Makyn
President of the IDB, Luis Alberto Moreno (left), speaks with Jamaica's Minister of Finance during a visit in December 2014. Jamaica and Cuba are expected to be big topics at the next IDB meeting to be held in The Bahamas.

Far removed from the Western Hemisphere, it probably sounded brilliant a few years ago to IDB President Luis Alberto Moreno. A late comer to the south-south trade concept, he embraced the notion after he saw the impact that Asia was having on Latin America.

South Korea is an important player in the region, participating in various infrastructure programmes, selling heavy machinery and an important buyer of commodities. Korean cars clog the arteries of most Latin American cities.

Unfortunately, the timing of the Latin American conference in Asia could not have been worse. Commodities are in a slump, the region's economies are stalled and the Asian governments are tired of being beggared by their Latin American counterparts.

The only exception appears to be Argentina, which has been sitting on the sidelines for more than a decade. Beijing recently made huge commitments to build new infrastructure projects in the country and help develop the Vaca

Nevertheless, in contrast to previous IDB meetings, when the governments that were in trouble used them as a venue to hammer out solutions, the distance was too great and the attendance was too thin to attempt it in Busan. Instead, the focus was on the challenges that the individual countries face, from the never-ending saga in Petrobras, to the "imminent" collapse of Venezuela, and the torpid Mexican economy.

There was very little discussion of the opportunities that lie ahead. The fact of the matter is that the downward phase of the commodity cycle is coming to an end.

India is entering into the accelerated phase of its development programme, and it will soon need massive amounts of commodities to modernise its infrastructure and housing. Moreover, this year is an excellent opportunity for economic reforms, because there are few elections in the region. Last of all, the global economy is growing at the fastest pace in almost a decade, thanks to the strong recovery in the United States and the improving prospects in Europe.

Therefore, there should have been much more to discuss.

The only ray of light in Busan was Cuba. There was a great deal of discussion of what the re-integration of Cuba implies. Great strides are already underway. Last month, the Cuban government tapped Odebrecht to construct the third terminal at Havana's Jose Marti International Airport. It will handle the tidal wave of tourists that will soon arrive. The new facility is expected to handle 2,000 passengers per hour. American credit card companies and banks are establishing routing systems to process charges.

Although European and Latin American banks process credit card transactions that were made on the island, US institutions could not. Tour operators are expecting an enormous increase in arrivals, as North Americans flock to visit a place that was previously off-limits. Government officials are talking about US$20 billion in foreign direct investment (FDI) over the next four years, which will turbo charge the US$80 billion economy.

Like many of its Caribbean neighbours, Cuba will continue to post a relatively large trade deficit. However, this will be offset by a large services surplus. In addition to tourism, the island will most likely become a major provider of medical services - taking advantage of the large number of doctors and specialists.

Fortunately, the location of next year's IDB meetings will be in The Bahamas. This was probably meant to take advantage of the new Baha Mar mega resort that opens this year. Next year's meetings will cast a spotlight on the Caribbean. Not only will Cuba be the centrepiece of attention, Jamaica will also garner a great deal of interest.

The collapse in oil prices has been a windfall for the island economy, and the possible legalisation of marijuana will most likely lead to massive inflows of FDI by pharmaceutical companies and hotel operators.

Last of all, the acceleration of the US and European economies are promising to boost the small universe of islands that depend on tourism. Last year, the Caribbean grew 4.6 per cent y/y, and the Dominican Republic is set to expand seven per cent y/y in 2015. Tourist arrivals in DomRep jumped 10 per cent y/y last year, and the increase will be higher in 2015.

The meetings in Busan may have been a bore, but they will be more exciting next year.

• Dr Walter T. Molano is a managing partner and the head of research at BCP Securities LLC. wmolano@bcpsecurities.com