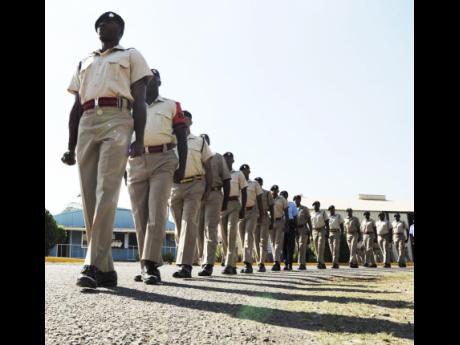 Ricardo Makyn
Newly trained soldiers are seen at Up Park Camp on graudation from the JDF Technical Training Institute at UP Park Campin this 2012 Gleaner photo. The 52-year-old JDF credit union began expanding its membership base beyond soldiers and their spouses in April 2015.

Lieutenant Colonel Radgh Mason, president of the Jamaica Defence Force Co-operative Credit Union (JDFCCU), says the cooperative has increased marketing spend in its bid to grow savings by J$200 million and membership by 1,500 by year end.

The credit union, which caters to soldiers, has $1.3 billion in assets.

But following the opening of JDFCCU's bond to a wider constituency in April, the marketing budget of $6 million was increased by an additional $2 million to attract the attention of relatives of soldiers and the staff of associated organisations that do business with the army. The co-operative currently has 9,000 members.

The JDFCCU has also rolled out new incentives to support its growth plan. This includes a school loan at 14 per cent, and a nine per cent interest on deposits, which Mason said is well above the local savings market.

The credit union aims to grow loans from

Marketing manager Janice Blake said that while the credit union has been positioning to satisfy Bank of Jamaica requirements by strengthening its asset and capital base, it saw no need to pursue a merger, as other credit unions have been doing.

The new categories of persons who now qualify for membership in JDFCCU are employees and members of organisations affiliated with the JDF, employees of other credit unions, relatives of members and professionals who provide services to the JDF. Among the affiliated organisations are suppliers, companies, associations, institutions such as Heart Trust/NTA and the Office of Disaster Preparedness and Emergency Management

"We have to keep it close-knit," said Blake.

Colonel Mason said JDFCCU's capital adequacy was at 22 per cent, above the 20 per cent required by the central bank. The push to grow savings is being driven by a "cash for cash" incentive introduced in May, whereby top savers are rewarded with money prizes.

JDFCCU was founded 52 years ago. It is run by general manager Patricia Tomlinson.