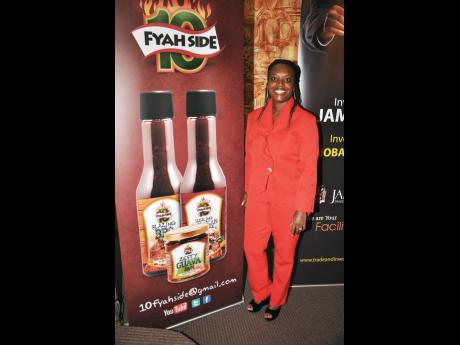 Jermaine Barnaby
In this October 31, 2013 file photo, Heneka Watkis- Porter poses next to a poster at the launch of her 10 Fyah Side products at the offices of Jampro in New Kingston.

The owner of the popular Clarendon eatery, Fyah Side, has secured an injunction against a businesswoman in Kingston that restrains her from using the trademark.

The decision by Court of Appeal Justice Almarie Sinclair-Haynes sets aside the decision of Supreme Court Justice Kissock Laing, who had refused to grant the restraining order to David Orlando Tapper, proprietor of the Clarendon-based Fyah Side Jerk and Bar, who has been trying to bar Heneka Watkis-Porter from using the marquee 10 Fyah Side at her business, which operates from Devon House in Kingston.

Tapper has operated his Fyah Side business at Toll Gate for seven years, while Watkis-Porter has been in business for two years.

The appeals court said Justice Laing failed to consider the strength of Tapper's case and was erroneous in his finding of unreasonable delay by Tapper to apply for the order. Tapper had learned of the other application in November 2013, but filed for the restraining order more than a year later in January 2015. However, the appeals court noted that the businessman had pursued other remedies within the period before turning to the courts.

Watkis-Porter declined to comment on Tuesday on what her next move would be.

Fyah Side Jerk and Bar is a full-service restaurant that offers jerk pork, chicken, fish, sausages and soups and has been owned and operated by Tapper since November 2008. Fyah Side is also the name of the seasonings and sauces, which the establishment uses in the preparation of its food.

Fyah Side products are also sold as separate end products to its customers. The logos on the products are flames which form the words Fyah Side. The business name was registered with the Companies Office in January 2009.

Watkis-Porter sells jellies, jams, sauces and condiments under the brand name '10 Fyah Side'. The brand is operated by her company Patwa Apparel Limited from Devon House. Her brand first came on the market in January 2013. Her mark has the numeral 10 with the words 'Fyah Side' super-imposed on the numeral.

Tapper told the court that he became aware of Watkis-Porter's use of the trademark in November 2013 in a telephone call from his sister, who cited an article in The Gleaner which featured Watkis-Porter launching her new line. He said he bought a copy of the newspaper and discovered that 10 Fyah Side's name, design and products were similar to his brand and business name.

As a result, he went to the Jamaica Intellectual Property Office (JIPO) to protect his marks, where a search revealed a pending application filed on October 8, 2013 to register 10 Fyah Side as a trademark. He was prevented from registering his marks for his food business because of Watkis-Porter's prior application.

In February 2014, Tapper registered his opposition to the registration of the 10 Fyah Side trademark.

Tapper complained that Watkis-Porter's trademark and design has led the public to believe that her goods and products were his.

Evidence in support of both parties' applications was filed at JIPO and in October 2014, and the organisation informed them that a hearing date would be fixed. Tapper sent a cease and desist letter to Watkis-Porter, who responded that she would continue to use the mark. As a result, Tapper filed a case in the Supreme Court.

Although Tapper's marks were not registered, he said his brand was extensively marketed and advertised and included business calendars, specially designed food boxes, listing in the business Reach Everybody Directory (Red Bk Jamaica) and Rope-een.com.

Watkis-Porter, he said, only started using her trademark as a brand of her company Patwa Apparel in January 2013. He contended that 10 Fyah Side cannot accurately be referred to as an extension of the brand Patwa Apparel, which engages in designing, marketing and distribution of clothing and is not associated with foods, spices or sauces.

His application was supported by affidavits from two customers, including Raymond McLean, whose evidence was that he read the article on the launch of 10 Fyah Side in The Gleaner online on November 4, 2014 and was of the view that it was Fyah Side Jerk and Bar.

However, Watkis-Porter said her mark is distinctive in its design, meaning and packaging. She said she was unaware of any confusion or likelihood of confusion because Tapper operates in a different market and that she distributes sauces and condiments to supermarkets and specialised stores locally and internationally.

She said she had no knowledge of Tapper's use of the mark when she conceived the brand name for her line of sauces and condiments.

Justice Laing, not being able to determine which of the two would lose more, decided to rule in favour of the status quo.

However, Appeal Court Justice Sinclair-Haynes said the judge's exercise of his discretion was plainly wrong.

She noted that Tapper's business was in existence for many years before Watkis-Porter's; and that Fyah Side Jerk has been the recipient of awards which, along with the business itself, have been featured in newspaper spreads in 2011 and 2013, thereby gaining islandwide exposure.

It could, therefore, be inferred that some level of goodwill or reputation is attached to Tapper's business, and that the eatery's reputation extended beyond the borders of Clarendon to the island at large. Citing the evidence of Cecil Dinnall, a resident of Saint Andrew who has tra-velled to Clarendon to patronise Tapper's restaurant, the appeal court judge said.

"In fact, it was his evidence that it is a popular rest spot."

The risk that a substantial number of persons among the public will believe that there was a business connection between Tapper and Watkis-Porter is indeed real, Justice Sinclair-Haynes added.

Although Tapper's mark was not registered with JIPO, she said Watkis-Porter could have discovered his business which had been prominently featured in the newspapers at least twice and was advertised in the business directory.

Indeed, in May 2014, a few months before Watkis-Porter applied to register her mark, Tapper's business was prominently featured in the newspaper, she said.

The judge was also persuaded by evidence supplied by Tapper that Watkis-Porter's goods were being identified as his.

"Both products are spicy sauces. The marks both contain identical words and the use of flames," Justice Sinclair-Haynes said.

She ruled that Tapper was more likely to suffer irremediable harm and granted the injunction against Watkis-Porter.

Justice Laing, she said, regarded Tapper's delay in the filing of his injunction as a ground for refusing his application.

She said the judge observed that Tapper had knowledge that his brand and mark were being used by Watkis-Porter since November 2013, yet his application to the court was made one year and two months after, in January this year.

Justice Sinclair-Haynes, having reviewed various steps taken by Tapper to stop Watkis-Porter from using his mark, said it was not correct that the delay in approaching the court was unreasonable. Nor could it be properly asserted that Tapper did not promptly seek legal advice, she added.