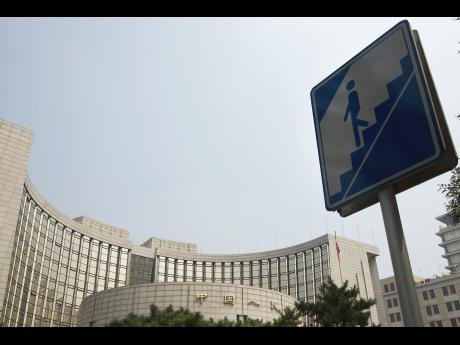 China tried Thursday to ease fears of more big declines for the yuan as companies from global automakers to Chinese clothing exporters faced a new era of uncertain exchange rates.

There is "no basis for persistent and substantial devaluation," said a deputy central bank governor, Zhang Xiaohui, at a news conference. Zhang said the yuan is close to "market levels" after two days of sharp declines.

By midday on Thursday, the yuan was down 2.9 per cent since Tuesday's surprise announcement of a more flexible exchange rate. The People's Bank of China said the change was aimed at making the tightly controlled yuan more market-oriented.

Many economists said the decline was too small to help Chinese exports due to weak global demand. But the change fuelled concern the yuan might fall further, giving Chinese traders a price advantage over foreign rivals and possibly igniting a "currency war" if other governments fight back by depressing their own exchange rates.

"The impact on foreign exporters is only beginning," said Evan Lucas, a financial market strategist for the Australian firm IG Markets, in a report.

International traders have long coped with swings by the dollar, euro and other currencies. They can hedge, or insure against unfavourable changes, by signing contracts to buy them at fixed prices on future dates. Large manufacturers also put facilities in multiple locations, allowing them to switch production to lower-cost sites as currencies fluctuate.

On a larger scale, however, more flexibility could end the yuan's status as a stable anchor among currencies of developing countries, said Rajiv Biswas, chief Asia economist for IHS.

If it leads to more devaluations, "it could increase uncertainty and turmoil in global currency markets," said Biswas in an email.

At the news conference, the central bank's chief deputy governor rejected suggestions Beijing planned to depreciate the yuan by up to 10 per cent to help exporters.

"This is sheer nonsense. It is totally unfounded," said the official, Yi Gang.

Financial markets responded to the central bank comments by boosting the yuan. The currency was down 0.8 per cent at midmorning Thursday but after the news conference that narrowed to a 0.2 per cent decline compared with Wednesday's closing price.

"This should pour cold water on claims that the PBOC is trying to devalue the currency in order to shore up exports," said Julian Evans-Pritchard of Capital Economics in a report. "A larger-scale weakening of the renminbi looks increasingly unlikely."

The global implications of a more flexible yuan are magnified by China's status as the world's No. 2 economy and biggest exporter, the top trading partner for most of Asian neighbours and also a competitor with Japan, Korea, Thailand and others in foreign markets for steel, shoes, toys and other goods.

Under its latest policy change, the Chinese central bank said the band within which the yuan is allowed to fluctuate by 2 percent up or down each day will be based on the previous day's trading and data on currency supply and demand. That replaced a strategy under which the rate was based on a basket of currencies.

The bank had allowed little movement against the dollar since the 2008 global crisis. That pushed up the yuan as the dollar rose over the past year, hurting Chinese exporters as other developing country currencies fell. The central bank said it acted because the Chinese currency was rising while market forces said should fall.

The move toward more flexibility at a time when market pressures were set to push the yuan down left Washington and other trading partners that have criticised Beijing's currency controls off balance. They have urged China for years to switch to a market-based system but assumed that would cause the yuan to rise and help their own exporters.

That leaves the US government in an "awkward and difficult" position, said Eswar Prasad, a professor of trade policy at Cornell University.

"A falling yuan and a rising bilateral US trade deficit with China will sharpen congressional criticism of China's currency policies," he said.

"But the administration has no economic basis for criticising China's move," said Prasad. "Indeed, preventing the yuan from depreciating further would run counter to US and IMF calls for a more market-determined exchange rate."

Financial analysts say the yuan could be overvalued by up to 10 per cent. That would mean allowing market forces free rein might push it down even further.

For automakers and other global companies that increasingly rely on sales to China, that could erode revenues as they are brought home and converted into foreign currency. Already this year, Volkswagen and Hyundai have reported profit declines due to weaker Chinese sales. With many automakers reporting declines in July sales, such losses could be magnified by further weakening of the yuan.

Some Chinese exporters suspended signing contracts in foreign currencies, according to news reports.

"Right now we are not optimistic," the manager, Meng Zhuo, was quoted as saying.

China's Asian neighbours face a potentially wrenching transition as they cope with the two-pronged threat of more competition from its exports and weaker Chinese demand for their goods.

Manufacturers of computer disk drives have shifted some operations from Thailand to China and that outflow could accelerate if a weaker yuan reduces Chinese operating costs, according to Sathirathai and Wan.

Many economists saw Beijing's policy change an effort to unload a glut of excess supplies in Chinese industries from steel to solar panel manufacturing that have led to price-cutting wars and threatened the financial health of manufacturers.

"What they are effectively doing is exporting deflation," said Evans of IG Markets. "This is a concern from the perspective of foreign exporting."