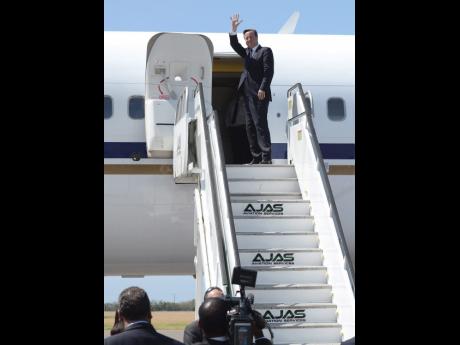 The optics could not have been more stark.

Sir Hilary's lengthy essay that posed as a letter begged the governing face of Britain to consider reparations as a way for Jamaica and other Caribbean peoples to liberate their minds from the shackles of the past so that they can pivot towards innovating their way to prosperity.

Prime Minister David Cameron, we assume, got that message. He must have, it was on social media.

Cameron heard reparations, and his response to it was classic - he came bearing gifts that would allow Jamaica to incarcerate its lost potential more comfortably.

And in the spirit of reciprocity - that's a buzzword in trade matters - he assured Jamaica that he was not pandering. The prison would also accommodate convicts that the United Kingdom wanted to export. And it would provide business for UK businesses. Win-win.

To be sure, the term 'reparations' does, in a sense, imply 'repair'. And better roads and bridges, as well as more humane prison conditions are welcome. But just how much can Mr Cameron's £300 million accomplish across the region? It couldn't even do much in Jamaica alone.

Cameron's infrastructure gift translates to $54 billion in Jamaican currency, of which Jamaica gets around $5 billion.

That's not chump change, as we say, but to put it in context, the University of the West Indies, Mona, is in the process of negotiating deals worth $120 billion with Chinese investors to redevelop the Jamaican campuses, including a modernised teaching hospital. And the Chinese are finalising a highway project - the North-South Link - worth around $65 billion to $70 billion (US$600 million) and they get land in exchange for the loan.

Cameron's play is the equivalent of Barack Obama's small-bore US$70 million ($8 billion) that is supposed to make a difference for youngsters all across the Caricom bloc. Again, the gesture by the US president was welcomed, but it felt like just that - a gesture.

The United States and the United Kingdom are suddenly interested in the Caribbean again as the influence of China is on the rise and Russia is blowing kisses at Cuba. They may also be a little worried that ignoring their backyard and former balance sheet asset could allow unsavoury elements to slip in and find a nesting place - you know, terrorists.

With all due respect to Sir Hilary, not everyone is on the reparations bandwagon. This indifference is mostly evident in the young. What everyone wants is opportunity. They just disagree on how it should manifest.

The education system is a really good start - one that Jamaica has underinvested in for far too long.

Since Cameron is wont to come bearing gifts, the next time he should consider proposing a real project with the right type of resources that invests in the education sector - a project that lays groundwork for future innovators and job creators, that envisions a future of an economy that will rise on the talents and intellectual pursuits of its people, and not the repair of its prisons and potholes.