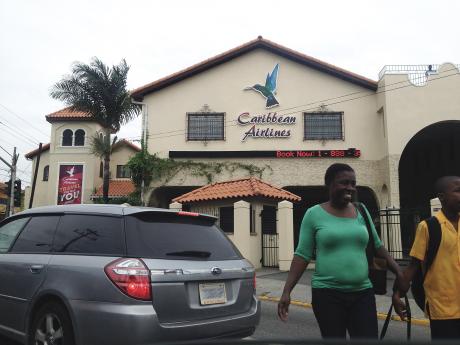 Lavern Clarke
A Caribbean Airlines ticketing office is seen at a busy intersection in Liguanea, Kingston.

The state-owned Caribbean Airlines Limited (CAL) says it is working internally on various projects to significantly improve its financial position even as the new Keith Rowley government signalled its intention to reduce the subsidy to the carrier.

Trinidad and Tobago has indicated in its 2016 budget that it will slash the current TT$200 million cushion allocated to the carrier to TT$92.1 million next year.

The decision comes amid continuing losses at the airline, which is majority-owned by the Trinidad government. Jamaica holds a 16 per cent stake.

Earlier this year, then finance minister, Larry Howai, told Parliament that CAL had made a loss of US$60 million in 2014 but he expected the airline to break even by 2017.

"All of the shareholders, whatever the political affiliation, have been extremely patient and extremely committed to this airline over the years," said DiLollo.

The airline is not interested in seeking another bailout, he said at a briefing, even while applauding successive administrations for their support.

"We are trying desperately to minimise that to zero as quickly as we possibly can, but obviously returning value for shareholders in a socio-economically balanced manner," said DiLollo.

DiLollo said the carrier was working on a number of initiatives with set targets meant to improve business.

"We are about 35 to 40 per cent of the way there. There is much work to do. In the next month as all of the initiatives come into play (it will) add considerably to that progress," said the airline executive.

"It's a dynamic environment. We have deployed 32 transformational projects in the company that are starting to yield very positive results. We are very happy with those results today."

Still, he said, the air bridge between Trinidad and Tobago "requires some level of assistance" and that the current ticket price was unprofitable for the carrier.

"The air bridge at current ticket prices which date back to 1992 is not something we can look at in today's inflationary realities and say that the T&T (inter-island) route is a positive contribution to CAL," he said.