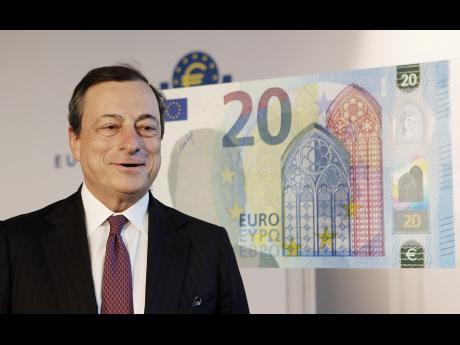 AP
In this Tuesday, February 24, 2015 file photo, Mario Draghi, the president of the European Central Bank, stands next to a copy of a euro banknote in Frankfurt, Germany. On Thursday, October 22, 2015, Draghi hinted that the bank may expand its monetary stimulus at its December meeting in order to shore up the ailing recovery in the 19-country eurozone. (AP Photo/Michael Probst, File)

CITING WORRIES about China and developing markets, the head of the European Central Bank (ECB) on Thursday signalled it could increase monetary stimulus to the Eurozone at a meeting in December.

The remarks by Mario Draghi raised expectations the bank might extend its €1.1-trillion (US$1.2 trillion) bond-purchase programme aimed at raising inflation and helping a spotty recovery.

Draghi made it clear that the ECB was also considering other measures, such as further cutting one of its key interest rates.

"We are ready to act, if needed," he said after a policy meeting in Malta.

The ECB's governing council, he added, had a "very rich discussion" and was "open to a whole menu of monetary policy instruments".

Jennifer McKeown, senior European economist at Capital Economics, wrote in a note to investors that "this was about the strongest hint that the president could have made that action is imminent.

"The bigger question is, just what the bank will do."

The euro fell sharply on the news, as more monetary stimulus or lower rates tend to weigh on a currency. The 19-country euro fell from above US$1.1300 before Draghi's comments to US$1.1160, while stocks rose.

Analysts had expected Draghi to hold out the possibility of more stimulus in order to keep a lid on the euro's value, since a weaker currency helps exporters and helps nudge up inflation. But Thursday's comments seemed more direct than some investors had expected.

Any move by the ECB to increase monetary stimulus at its December 3 meeting would come just as the US Federal Reserve is considering when to raise interest rates. The Fed could act towards the end of this year or in early 2016. The fact that the central banks are moving in opposite directions is expected to keep weighing on the value of the euro against the dollar, something the ECB is likely to welcome.

Draghi stressed that while the exchange rate "is not a policy target", the ECB could consider it because it affected inflation.

Maintaining stable prices, defined as inflation just under two per cent, is the ECB's key job. By last count, in September, the inflation rate was way too low at minus 0.1 per cent annually. That's a sign of weak demand. And low inflation - or outright falling prices - can make it harder for Europe's over-indebted countries and companies to reduce their burdens. It can also slow Eurozone countries' efforts to reduce their business costs relative to other trading partners in the bloc.

The ECB has already cut its benchmark interest rate to a record low of 0.05 per cent. The bank left it there Thursday, and has said that's as low as it can go.

Draghi said, however, that one tool that was discussed was a potential further cut in the deposit rate charged to banks to leave excess cash at the central bank. The rate is already negative 0.2 per cent. By cutting it further, it could push banks to not hoard money at the ECB but invest or lend it.

The ECB's stance was not "wait and see," he said, but "work and be ready".

The Eurozone economy grew by a quarterly rate of 0.4 per cent in the April-June period, but unemployment remains high at 11 per cent.

Draghi said that Eurozone demand seemed resilient but that trouble in emerging markets, particularly China, posed risks that could push the bank to act.

The ECB's stimulus programme entails buying €60 billion in bonds monthly from banks with newly created money, in hopes they will expand credit. By, in essence, printing money to make the purchases, the ECB has increased the supply of euros available, which has pushed down its exchange rate.

The programme is set to run at least through September 2016. The ECB could increase it by raising the monthly purchase amount or letting it run longer.