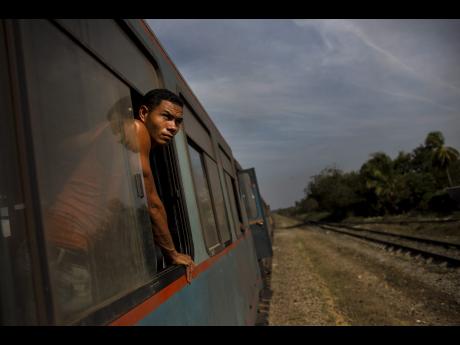 AP
In this March 23, 2015 photo, a train passenger looks out at the countryside between Ciego de Avila and Santa Clara, Cuba. (AP Photo/Ramon Espinosa) 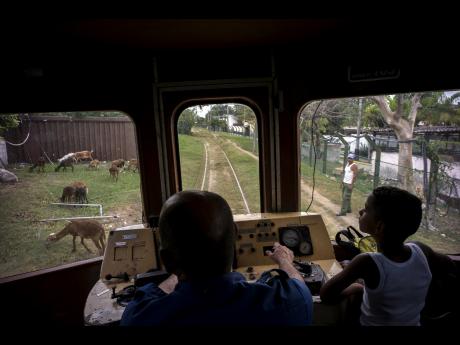 AP
In this August 26, 2015 photo, a boy rides next to the engineer of an electric Hershey train in the Casablanca municipality of Havana, Cuba. (AP Photo/Ramon Espinosa)
1
2

From east to west, trains offer a fine-grained, slow-moving view of Cuba that few foreigners ever see.

Goats graze alongside tracks in the countryside, forcing trains to brake to avoid hitting them. Old American sedans line up at a crossing while locomotives pass. Horse-drawn carts cross the rails after a train passed by.

A boy hitches a ride home from school with a train's engineer. A man on horseback rides alongside tracks that used to carry tons of sugar from Cuba's now withered sugar industry. A young man boards with goats to sell in Havana.

While the island is slowly modernising its rail system, mistreatment and theft of railway property by the people it was built to serve ensure it remains the slowest way to get around already slow-moving Cuba.

The trip from Havana to Santiago, 475 miles (765 km) to the east, takes an average of 15 hours, if the train doesn't break down. A slightly more reliable train with air conditioning is not in service as it is currently undergoing repairs.

On the way from one end of the country to the other, families chat and try to catch a few minutes of sleep, stretching out between rattling seats. The train's rocking lulls children to sleep under the eye of adult relatives. Men stand next to an open train door, chatting.

At their peak, Cuban trains featured dining cars and other high-end services. Today, refreshment comes from the vendors who board at many stations offering cold sandwiches and soft drinks. Snacks are also sold outside.

Cuba became the first Latin American country with a train system in the mid-19th century when colonial Spain began connecting Havana with the sugar-growing regions outside the capital. The network grew to 5,600 miles of rails crisscrossing the island before the system fell into disrepair. It suffered along with much of the country's infrastructure when the Soviet Union's collapse cut Cuba off from the subsidies that Moscow had pumped into its economy. The longstanding US trade embargo made it hard to get parts.

Trains connecting Cuba's capital with the former chocolate company town of Hershey in Matanzas province are filled with tourists who pay less than 50 cents for the trip as the island floods with visitors after the declaration of detente with the United States.

As for the route between Santiago and Havana, Cubans pay a little more than US$1 to shuttle goods or visit faraway family. Visiting foreigners are charged US$30 for the same trip.