US companies in Cuba for weeklong commercial fair 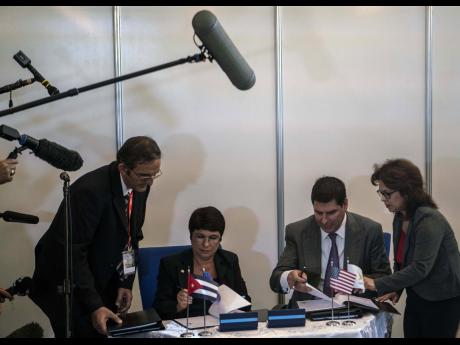 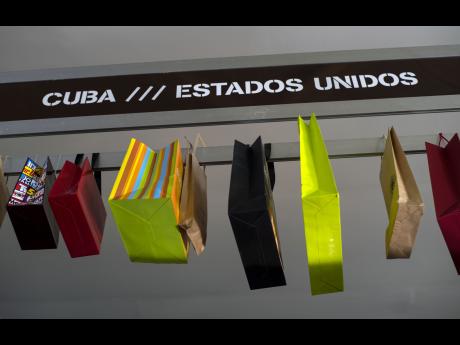 AP
A stand that reads “Cuba, United States” showcases paper bags made by a US company, one of many stands set up at the weeklong 33rd Havana International Fair in Havana, Cuba, on Monday.
1
2

A weeklong celebration of commerce is under way in one of the world's last communist countries, with hundreds of international corporations including some big United States (US) firms flocking to Havana to try to do business with a government basking in expectations of growth set off by detente with Washington.

The Havana International Fair has long been among the stranger events in the world of international business - a trade fair in a cash-starved country that's embargoed by the world's most powerful nation and views markets with deep suspicion.

For years, Cuban bureaucrats, foreign diplomats and businessmen gamely trooped through the halls of the Pabexpo fairgrounds on the outskirts of Havana, eyeing stalls stocked with products like Spanish canned vegetables, and dutifully attending government presentations on opportunities for investments in state-controlled pig farms and nickel mines.

This year's fair has something new - the electric buzz of business hustling to capitalise on what many feel will be a boom set off by the start of the normalisation of relations with the US.

"This entire process has aroused international interest," Commerce Minister Rodrigo Malmierca said Monday as he announced that Cuba saw 4.7 per cent growth in the first half of the year, and is expected to close 2015 at 4 per cent, up from an anaemic 1.3 per cent in 2014. "We are convinced that it is possible to have a normal and civilised relationship with the United States."

The loosening of US rules on visiting Cuba, and a rush to see the country that many believe is about to change, has tourist visits up by 18 per cent, or 400,000 more people, this year. That's pumped hundreds of millions of dollars into the centrally controlled economy.

The expectation that the US will steadily continue to loosen restrictions on trade with Cuba has set off a fever among international investors, who are furiously trying to get footholds in a market that they believe will soar over the long-term.

"I have a lot of faith that our government will permit the free flow of tourists to Cuba, and the day that happens this island will become the place that all tourists want to come see," said Sprint CEO Marcelo Claure, who announced on Monday that his company had struck a deal directly with the Cuban state telecommunications company ETECSA to provide roaming services to Sprint customers in Cuba. "I want all my Sprint customers, my 60 million customers, to come to Cuba and feel as if they were in any other country in the world."

This year's fair, known by the Spanish acronym FIHAV, is the biggest in 15 years, with 300 Cuban companies and 600 from 70 other countries, including 20 from the United States. Pepsi, Napa Auto Parts, Gallo Wines and a US tractor company that just got Cuban permission to set up a plant at the new Mariel port and free trade zone have stands among the typical food exporters, among the few American businesses allowed to sell their goods to Cuban under the US embargo.

Most said they saw few short-term opportunities for business in Cuba due mostly to the thicket of prohibitions in the US embargo.

"This is a long-term play," said Phil Klein, vice-president for the Americas for Gallo, which set up a stand featuring dozens of brands of wine and spirits, an open bar and models in high heels and short skirts. "We're here to learn about the country now that things are opening up."

The Mariel port stand was packed with foreign executives, as were the stands of companies from long-time Cuban trading partners such as Spain. That country had four pavilions filled with dozens of firms doing hundreds of millions of dollars in annual business with Cuba that they expect to grow in the wake of detente with the US.

"We see it as an opportunity," Javier Alvarez, executive of Plasvisa, a Spanish firm that sells €4 million a year worth of plastic laminates and films and doors in Cuba, mostly to high-end hotel projects. "It's clear that new businesses will come and compete. We have a path that we've built over the last five years and I don't think that anyone will push us out of the way."

The US Chamber of Commerce brought a delegation of 40 US companies including Caterpillar, Amway, Sprint and Cargill for meetings with Cuban officials and the first board meeting of the US-Cuba Business Council, a group dedicated to trade between the two countries.

Jodi Bond, the chamber's vice-president of the Americas, said the council was optimistic that trade will begin to flow between the US and Cuba as each country figures out how to harmonise clashing sets of byzantine regulations. For example, while President Obama has legalised US sales of construction materials to homeowners and private businesses in Cuba, the communist government maintains a state monopoly on all imports and exports.

"We want to see US products as part of that beautiful build-out of Cuba," Bond said. "We've done this in so many markets around the world we know that it just takes time."