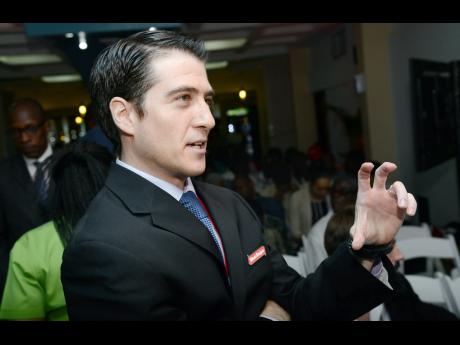 Rudolph Brown
Rudolph Brown/Photographer Ricardo Nuncio of Heineken Americas was announced as the new CEO of Red Stripe Jamaica, at the brewery's annual generel meeting in Kingston on Friday, November 13, 2015

Heineken has tapped Ricardo Nuncio as the new managing director of Red Stripe Jamaica, who will be transplanted from Mexico by midweek.

Nuncio, who, on Friday, was introduced to shareholders at Red Stripe's 97th annual general meeting, and possibly its last as a listed company, has served as regional sales director of Heineken Mexico for the last two years, with responsibility for Guerro, Morelos, Oaxaca and Chiapas. Prior to that engagement, his roles covered general management and marketing.

Nuncio will take over from Cedric Blair on Wednesday, November 18. Blair remains in the employ of Diageo and is taking up a regional position with the British drinks giant in Miami.

Heineken acquired majority control of Desnoes & Geddes Limited, which trades as Red Stripe, from Diageo Plc on October 7 for US$421 million, and has made an offer for the remaining shares held by minority owners. Heineken aims to take Red Stripe private providing it tops the 80 per cent ownership threshold required to delist. It currently owns 73.3 per cent of the company.

Some of those minority shareholders have indicated reluctance to accept the current US$0.259 per share offer from Heineken, an issue that representatives of the beer company sought to address by reaffirming Red Stripe as a valued brand.

"For the last five years, we have a conscious decision to invest in emerging markets because that's the nature of beer companies. We've also bought this brewery because of the iconic brand called Red Stripe," said Eugene Ubalijoro, who is one of the new Heineken-appointed directors on Red Stripe's board.

Ubalijoro assured shareholders that Heineken had no plans for major changes at the Jamaican brewery, and that Heineken recognises the uniqueness of the Red Stripe brand, which they want to preserve and grow.

Nuncio also told Friday's meeting that he is committed to growing the Red Stripe brand, saying he has always been attracted to the Jamaican brew and its iconic status.

The first quarter performance was a reversal of the trajectory for the financial year ending June, when profit fell from $3 billion to $2.3 billion.

Heineken has announced plans to align Red Stripe's reporting period with its own and that a new set of 'annual results for the Jamaican company will be published to reflect December 31 as the financial yearend.