Walter Molano | Spring is in the air 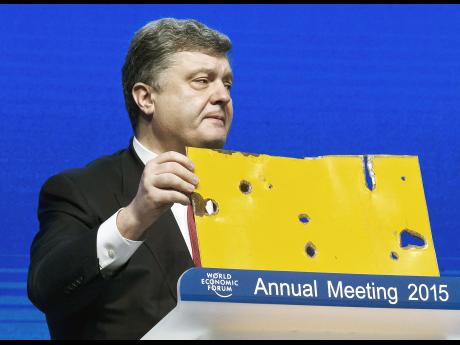 File
At the annual Davos economic forum in January 2015, Ukrainian President Petro Poroshenko shows a piece of a bus that was attacked during conflict in his country.

Spring was in its full glory when our entourage descended upon Kiev. Although the sun shone brightly and twinkled over the azure waters of the Dnieper, there was a chill in the air reminding us that winter had not released its iron grip.

The weather provided a perfect allegory of the political and economic travails facing the Ukraine. A ray of hope warms the hearts of Ukrainian government officials and entrepreneurs. The worst of the economic crisis has passed.

The economy plunged almost 10 per cent y/y last year, but it is expected to recover this year, with a growth rate of 1.5 per cent y/y to two per cent y/y. A perfect storm of devastating shocks waylaid the country.

The Ukraine is a major commodity producer. Once considered to be the breadbasket of the Soviet Union, its black soil provides for a vibrant agricultural sector. The ground brims with minerals, including iron ore and coal. Moreover, the vast hydrocarbon pipelines that transverse the country leave it exposed to the vagaries of the energy markets.

Therefore, last year's plunge in commodity prices was a debilitating blow for the Ukrainian economy. If that was not enough, the war with Russia stripped away the Crimea and important parts of its industrial heartland.

The Russian offensive in Donbas has displaced hundreds of thousands, forcing many people to flee for the capital. Scores of large companies have relocated to the west or been coerced into selling their operations or had to reorganise to operate under new economic realities. These include operating under Russian rules, enduring the hardships of the Russian embargo and adjusting their books to Russian accounting standards.

Fortunately, the resilience of the Ukrainian psyche was able to respond to the privations. Strong help from Europe, the United States and the IMF, along with a restructuring of the sovereign and most of the corporate debt, helped. This is the reason the country should be consolidating its gains next year to grow about two per cent y/y to 2.5 per cent y/y.

Good macroeconomic stewardship helped steer the Ukrainian recovery. A deep devaluation of the hryvnia was one of the factors that helped stabilise the external accounts.

The currency plunged to 35 early last year, from 8, and has recently been hovering in the 25 range. Most analysts expect that the National Bank of Ukraine will opt for a weaker currency position and allow it to oscillate around 30 over the course of the next few years.

Local analysts expect the shortfall will evaporate this year. The ongoing recovery in commodity prices could push the current account into the green by the end of 2017.

Of course, there has been a cost associated with the massive devaluation. This has been the impoverishment of the workforce. Wages have plummeted. Kiev is now one of the cheapest cities in the world, with a dinner for two at a posh restaurant coming in at US$20.

Still, while goods and services may appear cheap for foreign visitors, they are unattainable for locals. The average wage for government officials is about US$250 per month. Inflation has been on the decline, but it will still be about 15 per cent this year, thus whittling away the purchasing power of Ukrainian households.

These are the reasons the government is motivated to move ahead with the economic reforms as fast as possible. They want to accelerate the pace of GDP growth, restore capital inflows and improve the employment picture.

A series of important reforms are on the table, including an extensive privatisation program, pension reform, civil service reform, the reorganisation of NAFTOGAZ and elimination of the capital controls.

Major advances have already occurred, notably the shake-up of the banking sector.

All of these positive factors fuel the enthusiasm that is reflected among government officials and local business leaders.

Unfortunately, just as the cold chill reminds us that the depth of winter is never that far away, international headlines remind locals that important challenges lay ahead.

Worries about Brexit, Syrian refugees and the rantings of Marine Le Pen create the perception that EU accession may be a pipe dream. Likewise, the realpolitik of Donald Trump and his admiration for Vladimir Putin suggest that the warm embrace from the US may be fleeting and that they may have to eventually make amends with their eastern neighbour.

The reveries of spring can never wipe away reality.