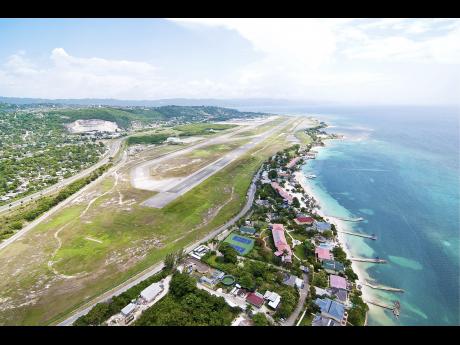 An aerial shot of the Sangster International Airport runway

MBJ Airports Limited, which operates the Sangster International Airport in Montego Bay, expects the runway project to cost of about US$60 million.

The extension of the runway to about three kilometres would increase the safety for aircraft while also allowing the Sangster airport to attract heavier-laden aircraft from Europe. It requires land acquisition and realignment of the roadway.

"We will extend towards the east ... not to the sea, because of the challenges of the marine life," said MBJ Airport CEO Dr Rafael Echevarne following his address at a MBJ Airports forum held Tuesday at the Montego Bay Convention Centre in Rose Hall.

The US$60 million figure is a preliminary estimate. Plans for the project have been in the news, on and off, since at least 2013.

The Airport Improvement Fund, which charges fees to passengers, will finance the runway development. The company is seeking feedback on the project from stakeholders and expects to have more complete costings within a month.

The runway extension is part of the airport master plan developed by MBJ. Its other aspects include extension and modernisation of the terminal building and additional aircraft parking space.

"In order to accommodate International Civil Aviation Organization (ICAO) standards, we need to provide a RESA to allow for an aircraft to decelerate safely, so a RESA would be at both ends of the runway," said Dr Echevarne. "So because we have to build a RESA, then we took the opportunity to decide to extend the runway."

The airport expects to grow total passenger movement by 3.5 per cent this year, atop the 3.8 million passengers estimated for 2015.

"Both the Airports Authority of Jamaica and MBJ signed an MOU to undertake this project, and we are now trying to decide who will manage the project, the cost and the financing. We are working on that," Echevarne said.

Echevarne explained that heavier aircraft with a full

passenger load require longer runways to safely land. He indicated that the extension would allow the airport to attract fully loaded A330s, 747s, and 787s from Moscow and beyond.

MBJ Airports is a consortium of Grupo Aeroportuario del Pacifico from Mexico with 74.5 per cent interest, and Vantage of Canada with 24.5 per cent. It operates the airport under a 35-year concession agreement.