Insurance Helpline | Insurance as a tool for social and economic development 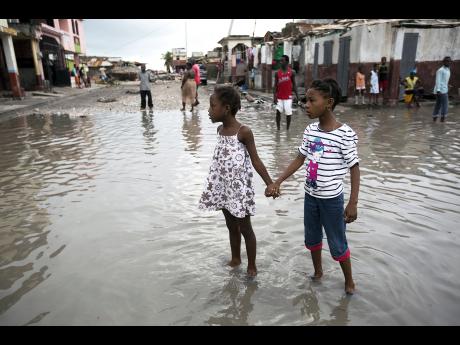 AP
Girls hold hands as they help each other wade through a flooded street after the passing of Hurricane Matthew in Les Cayes, Haiti, Thursday, October 6, 2016. CRIFF has announced a US$20m insurance payment for Haiti under that country’s cyclone insurance policy. 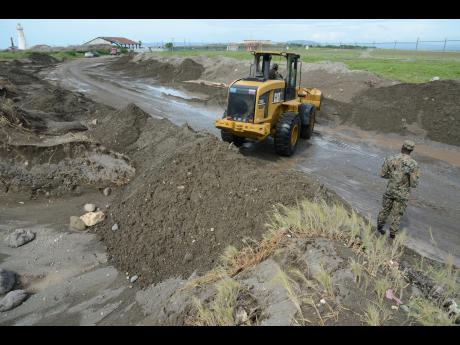 Rudolph Brown
JDF soldiers use a bulldozer to remove a pile-up of sand and silt from the Palisadoes main road in Kingston, dumped by surges linked to Hurricane Matthew on Tuesday, October 4.
1
2

The International Monetary Fund (IMF) has urged the Jamaican Government "to establish a financial inclusion council as part of the efforts to achieve higher economic growth by, among other things, improving financial access", according to an article published last week in this newspaper.

Financial inclusion is "access to affordable financial services to credit, insurance and savings, particularly for disadvantaged and low-income segments of the society".

That advice was given shortly after a government-appointed Economic Growth Council (EGC) officially presented its report to the Andrew Holness administration.

In the week that followed the IMF's recommendation, the country had a last-minute escape from a very powerful Hurricane Matthew. Most residents including insurance company heads breathed huge sighs of relief. The hurricane went on to cause the loss of more than 800 lives in Haiti and substantial damage in Eastern Cuba.

At the time of writing, it hit The Bahamas and led to the evacuation of thousands of persons in Florida and other adjoining states as it threatened to make landfall in North America.

After Hurricane Matthew's near hit in Jamaica, self-described former rat, Gordon Robinson an attorney at law who specialised in personal injury claims on behalf of insurers and columnist for this newspaper wrote a very provocative piece. Insurance companies, he said, were "heartless, inhuman parasites (who) went to great lengths to avoid settling legitimate claims".

IMF's advice, the EGC report, Hurricane Matthew and Gordon Robinson's article had me reviewing a magazine article that I wrote in 2001 titled 'Are insurers playing an effective role in social and economic development?'

That piece was written against the backdrop of the near-meltdown of Jamaica's banking and insurance sectors and the July 3 Portmore Mall fire which, at the time, was reported as one the island's largest fires. After the conflagration, it was found that the contents of 29 of the 37 privately owned shops in the mall 78 per cent were uninsured.

These uninsured business operators sought bailouts from the Government to recoup their losses. The article posed a number of questions to the minister of finance since that ministry had portfolio responsibility for the insurance industry.

Below is a sample of the questions that were asked:

1. Why should the owners of the uninsured businesses get bailouts from the public purse?

2. Was insurance coverage available from the market for the losses that these businesses had suffered?

3. Were the owners of these businesses unaware of the many risks that their businesses faced?

4. Did the business owners consciously decide to self-insure the risks of loss or damage by fire and other perils?

5. Was the fact that nearly eighty per cent of the businesses did not have insurance evidence of insurance market failure?

6. If coverage was available, was the price of insurance affordable?

8. Was the high rate of non-insurance in Portmore typical of small-business establishments across Jamaica?

9. What would be the situation in the context of a major disaster like a hurricane or an earthquake?

10. Was sustainable economic development possible if the Government acted as insurer of choice for privately owned businesses and disadvantaged groups in the society?

Former head of the national disaster management agency ODPEM and now director of the Disaster Risk Reduction Centre at the University of The West Indies, Mona, Barbara Carby, said recently that politicians completely hogged the show (my choice of words) during a press conference that was called the day before Hurricane Matthew was predicted to hit the island.

Fifteen years earlier and afterwards, not a single member of that group has attempted to obtain answers to the questions that I posed.

Insurance is a tool (for) development ... the skills and knowledge of how to use it beneficially need unleashing from the minds of (policymakers and) practitioners in the industry." The technocrats at the IMF have recognised this. The setting up of a financial-inclusion council to improve access to affordable financial services including insurance is, in my opinion, long overdue.

This column is not a mouthpiece for the insurance industry. It will, therefore, refrain from addressing Mr Robinson's negative perceptions which are shared by many other persons in the society.

These views about the industry can be changed over time by proactive pro-consumer regulations. The Financial Services Commission (FSC) after 15 years of existence appears to be slowly coming to that conclusion especially with respect to the creation of a climate for the introduction of micro-insurance. If the EGC's '5 in 4' goal is to be achieved, the FSC will have to move at a much faster pace.

Perhaps Mr Robinson's many skills and experience as a senior counsel might prove to be invaluable as a member of the financial inclusion council with responsibility for getting the insurance industry in shape?