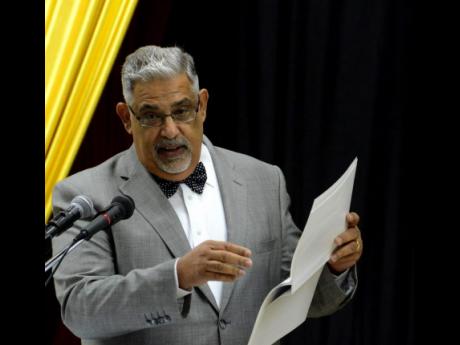 Gleaner File
Derek Jones, chairman of the D&G Pension Plan board of trustes, says he is awaiting legal advice to respond to the demand for three trustees to be removed from the board.

A group that's calling itself Red Stripers for Sustainable Pensions has mounted a challenge to plans to reform the Desnoes & Geddes Pension Plan, which includes a demand that three trustees be removed.

On September 30, the group fired off two letters, one of which sought the intervention of pension regulator, the Financial Services Commission (FSC), following a testy meeting where representatives of the group voiced strong opposition to amendment of the trust deed to change the pension plan from a defined benefit (DB) scheme to a defined contribution scheme.

"We ask that the FSC immediately intervene to halt the ongoing process of dismantling a healthy DB pension plan," read the letter to FSC Senior Director Nicolette Jenez.

Desnoes & Geddes Limited, which trades as Red Stripe Jamaica, has held a series of meetings since September 21 for some 1,006 plan members to approve the change to the pension plan. Red Stripe also sought approval to distribute a $3.8-billion surplus built up in the DB pension scheme, half of which would flow to the company for reinvestment in the brewery's operations and forward payment of the company's contribution to the scheme for up to 20 years.

A final vote was set for October 7, but the vote tally from the combined meetings is yet to be disclosed. Red Stripe needs more than 50 per cent of the votes for the resolutions to pass.

The Red Stripers, in their letter to the FSC, rejected the reasons for the distribution of the estimated $3.8 billion surplus.

They charged that "the sole reason for the management of Red Stripe Jamaica to propose the changes is to access a significant portion of the surplus"; that the trustees have not acted in the best interest of the plan membership; and that the management of the company has erroneously proposed benefits to members.

The Red Stripers also sent a letter to the Board of Trustees citing three trustees who they wanted removed - all of whom are currently employed to Red Stripe Jamaica, with one being on secondment to a joint venture company - and called for their replacement with more "experienced" professionals.

The Financial Gleaner reached out to the three trustees named in the letter. Up to press time, two responded, Marian Allen and Carrington Hartle, saying they stood by the comments provided by Trustee Chairman Derek Jones for this story.

"I fully support his response and would have no further comments on this topic," said Allen. The third trustee, Yaniece Gentles-Riley, did not respond.

Earlier on Wednesday, Jones had offered a short statement, which effectively affirmed support of the three trustees. He also said he was awaiting legal advice on how to deal with the issues contained in the Red Stripers' letter.

"I have now seen the letter to the secretary, board of trustees. In my view, all trustees effectively discharged their duties according to the trust deed and rules of the pension plan, namely to act in the best interests of all stakeholders," said the chairman via email.

"The authors say they wish to remove certain trustees based on the trust deed. I believe their desire and approach are ... misguided and as such, I have referred the matter to the trustees' lawyers for legal advice. Any further comment will await their counsel," he said.

In the series of meetings held by Red Stripe in Kingston and Montego Bay to approve the pension plan changes, three were with present employees and two each with pensioners and deferred vested members.

At the second meeting with the vested members on September 27, spokesperson for the Red Stripers, Keisha Wood, accused the company and the board of trustees of lacking transparency.

Red Stripe had argued that reforming the plan would ensure its longevity.

"There is no real risk of the company not being able to afford to pay the contributions in the future, so the argument around risk is not sustainable," Wood pushed back.

Jones told members at that meeting that consultations to reform the plan began in July 2013.

"The matter was raised, it was discussed, and independent advice was sought," he said.

"Would it be desirable for more time for reflection? Perhaps. But you have to appreciate it is a dynamic animal; it keeps moving, and at some point in time, you will have to say you like it or you don't like it."

The FSC up to press time had not responded to the Red Stripers' letter.