Insurance Helpline | Examination of a catastrophe in Portland 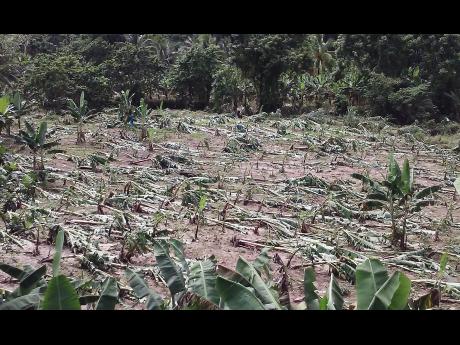 ‘MP appeals for help for flood-ravaged farmers’ said the headline of an article published in this newspaper on October 28.

Gareth Davis Sr wrote on the same subject two days later. This one was more specific. It was about a banana farmer, Fredericka Appleby. Her farm is in the Rio Grande Valley, near the town of Windsor in Portland.

Ms Appleby lost 4.5 acres of bananas due to three days of rain that caused the Rio Grande to overflow. The bananas were close to harvesting. The farmer suffered a similar type of loss in April. Since Davis’ article did not mention the word insurance, it will be assumed that Ms Appleby’s losses were uninsured.

How much did this particular farmer lose due to two back-toback losses that occurred within the space of six months? One agronomist with 15 years’ experience in the banana-growing industry estimates that the average cost of establishing one acre of bananas ranges from $100,000 to $400,000, depending on the farm techniques that were being practised.

Ms Appleby’s total losses during this year would therefore have amounted to between a low of $900,000 to a high of $3.6 million. Whatever the actual size of the total loss suffered by Ms Appleby, it will be a big blow for her.

She has been involved in banana farming for over 20 years. In the absence of insurance protection, the farmer is quite predictably “not sure that she will be able recover from the back-to-back losses that she suffered this year”.

There are many thousands of farmers across the island like Ms Appleby. Their livelihoods are under threat by forces of man and nature. Insurance companies are in the business of helping companies, other entities and individuals to manage risks. Can insurance be used as a tool for social and economic for the hard-working Applebys across the island as a substitute for appeals to help (which reminds me so much of what is happening in Matthew-ravaged Haiti)?

Banana farming is a high-risk business. Enterprises like Eastern Banana Estates, St Mary Banana Estates and Victoria Banana are among some of the mega-farms that have fallen by the wayside over the last 30 years.

On the other hand, Jamaica has had a very long history in the growing of bananas. A Banana Insurance Act was passed over 70 years ago. The legislation applied to “bananas sold for the purpose of being exported and in respect of which a cess has been collected”.

The protection afforded to growers related to “hurricane, tornado, cyclone, whirlwind, gale, or atmospheric disturbance, whether similar to the foregoing or not, which the (Banana) Board is satisfied is likely to have caused appreciable damage to any banana cultivation.”

I recall sitting in a meeting at the Banana Board offices in Kingston Gardens many years ago along with powerful industry interests. I represented a firm of insurance brokers who bought reinsurance in the London market to protect the liabilities of what was then called the liabilities of the Windstorm Fund.

It is my recollection that industry interests strongly opposed the expenditure of funds to buy the reinsurance and continue the long-standing relationship with those entities. In subsequent years, the fund was virtually wiped out due to a number of hurricanes.

Short-term considerations led to the non-purchase of reinsurance which, in turn, caused the demise of the 70-year-old fund that was originally set up to protect small farmers like Ms Appleby.

According to information published on the website of the Banana Board, the Jamaica Banana Industry’s Catastrophe Fund was started in 2007. It was created through seed funding from the European Union Banana Support Programme. “The aim of this fund is to provide assistance to commercial banana and plantain growers in order to facilitate rapid recovery of farms following windstorms and other catastrophic damage. The fund is governed by procedures outlined in the Jamaica Banana Industry’s Catastrophe Fund’s Operation Manual.”

A catastrophe is defined according to the board, as “a great and sudden disaster affecting a large number of growers in a wide geographic area. This can take the form of high winds, can take the form of high winds, flood, drought or other stimuli. For a catastrophe to be declared however, there must be 50 per cent or more damage to registered plant production units (matts) in a given geographic area."

To receive benefits growers must voluntarily register with the fund before January 31 each year. Growers must possess at least one acre of healthy bananas/plantains with at least 500 mats to benefit. And participants must make annual reports on banana and plantain production and sales.

Compensation will be provided in the form of material supplies. There is no fixed compensation rate as the amount paid depends on the level of damage and the quantity of funds that are available.

The fund, somewhat like the typical insurance contract, does not cover everything. Below are some of the exclusions:

- Farmers who are not registered under the fund or who had been deregistered;

- Farms with substandard husbandry or production levels well below that advocated by the Banana Board;

- Farms or parts thereof that are not intended for recovery; and

- Farmers who engage in violent activities to extort financial assets from the fund.

GK General Insurance Company, according to information on the website of the All-island Banana Growers Association (AIBGA), offers Livelihood Protection insurance (LPP). This is described as a micro-insurance that is not sector specific and "provides a fallback for persons whose incomes are affected by adverse weather events including strong winds, and/or rainfall during hurricanes and tropical storms". Beneficiaries of the LPP include farmers who depend on the weather for a good harvest. The LPP "targets all individuals irrespective of income level, and provides timely cash payouts following a weather event, and give policy holders the opportunity to rebuild their lives in the wake of a natural disaster."

LPP is offered in association with the People's Cooperative Bank and credit unions.

Provided that Ms Appleby and other persons like her who were qualified to participate in the Banana Catastrophe Fund actually signed up and bought LPP, the situation following the flood rains in Portland ought not to be so dire.

My suspicion is that the majority of persons who were affected, unfortunately did not fall into that category.