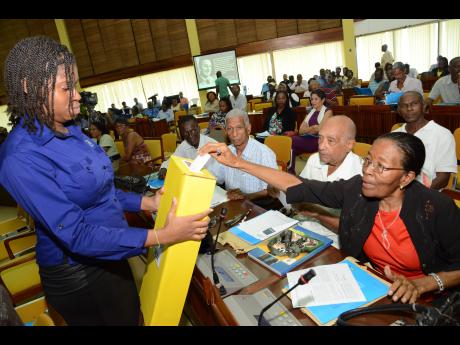 Rudolph Brown
A shareholder submits her ballot during the vote to approve a new scheme of arrangement for National Commercial bank Jamaica Limited at the banks's annual general meeting on Friday, January 27, 2017. Shareholders overwhelminingly approved the reorgainsation of the group, with only four persons voting against.

Shareholders of National Commercial Bank Jamaica Limited (NCB) approved the reorganisation of the group to create a holding company for the bank and its stake in Guardian Holdings Limited, an insurance conglomerate based in Trinidad and Tobago.

"The next relevant step in the process is the sanction of the Supreme Court of Jamaica, to be sought. This is to be done in a hearing in open court on February 22nd, 2017," said company secretary Dave Garcia at the bank's annual general meeting (AGM) on Friday.

"I declare the motion carried," said Lee-Chin, whose stake in NCB is held through several vehicles, the primary one being AIC Barbados with 1.24 billion shares or 50.29 per cent ownership.

"It is our best quarter ever," said NCB deputy managing director Dennis Cohen said at the AGM.

The treasury segment made the most for the group at $1.5 billion, followed by its wealth arm at $1.3 billion. "Our focus will be on our new strategic plan by 2020," said Cohen. "We expect another successful year providing value to shareholders."

NCB completed the $28-billion acquisition of 29.99 per cent of Guardian in 2016. Its GHL shares are held in NCB Financial Group (NCBFG), a new company formed a month prior to the acquisition of the GHL shares.

The restructuring also aims to facilitate the future expansion of the entity throughout the Caribbean region, said Group Managing Director Patrick Hylton at the AGM.

The scheme will become effective by April 2017, provided it is sanctioned by the Supreme Court.

NCBFG will become the holding company, with National Commercial Bank Jamaica Limited and Summer Success Limited (Trinidad & Tobago) as its two immediate fully controlled subsidiaries. Summer Success will only hold the 29.99 per cent shareholding in GHL.