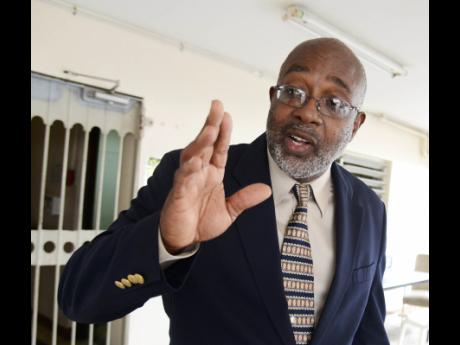 File
Member of Parliament Fitz Jackson speaks after his meeting with the Bankers Association of Jamaica on Monday, January 30, 2017, regarding banking fees.

'Big up' to South St Catherine Member of Parliament Fitz Jackson. This is for taking action to amend the Banking Services Act in an effort to protect depositors/consumers.

The MP wants to give banking industry regulator Bank of Jamaica control over the fees and charges customers have to pay.

He is, in effect, saying that the banking sector is not working efficiently and effectively as it should. Also, that unless the bankers have the regulator looking closely over their shoulders when calculating their fees and other charges, consumers will end up paying excessive charges.

Quite predictably, the bankers are screaming murder. Other critics of the MP's efforts include the Private Sector Organisation of Jamaica (PSOJ), which worries that if the measures suggested by Mr Jackson are implemented, they could lead to the reimposition of price controls by the State.

PSOJ is not a disinterested party. It is partly funded by contributions from the banking sector.

The organisation overlooks the fact that in the United States, insurance companies have to file for rate increases for some lines of business. State insurance regulators have the last say whether premium increases are imposed.

Consumers who buy health or medical insurance in Jamaica are in dire need of an advocate in Parliament like Fitz Jackson.

In an article, 'Competition in the private health insurance market 2002-2011', published in Volume XVII of the Fair Trade Commission magazine in January 2013, insurance regulator Financial Services Commission (FSC) described the market for health insurance as becoming "more and more concentrated to the point of being a duopoly (defined as a situation where two companies control all or most of the market), with one company controlling 65.8 per cent in 2011".

There have been no material changes to the structure of the market since 2011.

The article concluded that while the market is concentrated, "there are factors that enable it to be competitive".

Most surprisingly, no attempt was made by its authors to explain how they defined the term competitive. One factor that enabled competition was the absence of barriers to enter and exit the market. The other was low search and switching costs.

What these technical terms mean was left for the reader to decide. However, medical inflation, the risky nature of the business and low profit margins were cited as the reasons for market concentration.

The website www.economicsonline.co.uk describes a competitive market as one "in which a large number of suppliers compete with each other to satisfy the wants and needs of a large number of consumers. In a competitive market, no single supplier or producer, or group of producers, and no single consumer, or group of consumers, can dictate how the market operates".

A competitive market means that consumers have choices.

I also wrote an article "Is Jamaica's insurance sector competitive?" in the same issue of the FTC magazine. My conclusions were as follows:

- Competition in the local insurance market varies from product to product;

- The inability of individual buyers to understand and compare the various terms and conditions in insurance contracts was a major obstacle to competition;

- Market players have tended to focus on selling activities as opposed to performing advisory and sales support functions;

- The industry regulator has shown a preference to focus almost exclusively on prudential regulation - to the detriment of market conduct regulation. As a result, there are no requirements that stipulate that insurance contracts should be written in clear and simple language that the average person would understand;

- Competition between insurers for the average individual insurance buyer will not be, as effective as it should be and this will continue to lead to nasty surprises when insured events occur.

The Consumer Affairs Commission is trying in the face of resistance to get the banks to adopt its code of conduct. This is to ensure that customers get better deals. This is taking place in an industry that has more suppliers than there are in the 'concentrated' health segment of the life insurance industry. Few, if any, changes have taken place in over four years.

Accidents, illnesses, hospitalisation, and deaths have occurred among some of my relatives, associates, and friends over the course of the last few months. These events have led to the incurring of medical expenses running into hundreds of thousands of dollars.

Some of these costs have been paid out of savings while a part of the remainder was paid as claims made under health insurance plans. The amounts paid by insurers - by and large - were not efficiently handled. Delays, confrontations, poor service, the absence of mechanisms to handle complaints, the lack of after-sales service, denial of benefits, 40-page policy contracts, and discrimination against mental illnesses, collectively called market-conduct issues, are the order of the day.

"Private medical insurers help individuals to gain access to specialised treatment, tests, and scans. Insurers also look after the everyday health and well-being of individuals ... for treatments like dental care and physiotherapy," according to the Association of British Insurers' 2017 health insurance guide. "Insurers provide valuable support at a time of need ... to protect people and their families."

Based on anecdotal information and a very small sample of my friends and family, the situation that the ABI has described has not been happening in Jamaica for years.

The Insurance Association of Jamaica describes regulators like the FSC as "watchdogs for and protectors of consumers, particularly those who are not business savvy".

Private health insurance buyers need another Fitz Jackson to agitate on their behalf since the regulator deems the market competitive.