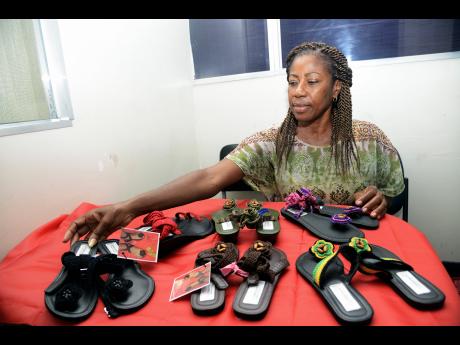 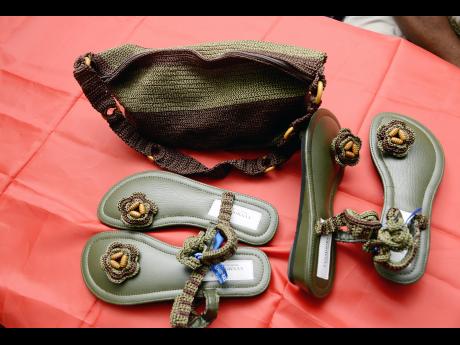 Norman Grindley
A close up view of crocheted footwear and bag made by Lynmoore's Unique Sandals on June 14, 2017.
1
2

Marlene Moore considers her crocheting skills a divine talent, but what started out for her as a pleasant pastime would eventually be parlayed into a footwear business.

The illness and death of her father four years ago, and the financial difficulties it spawned, forced her to drop sociology studies abroad and return to Jamaica.

And as she weighed what to do next to start earning money, the idea struck - why not crochet some sandals.

That led to the creation of Lynmoore's Unique Crochet Sandals, which, over time, has grown from a one-person operation in Portmore to a shop employing three others.

"My greatest challenge was financial. Most of the financial institutions required collateral for loans, which I didn't have," Moore said. "I also had difficulties getting the skilled persons that I needed to make the quality sandals that I wanted to put on the market."

Lynmoore's trades in hand-made sandals. Moore, at the start of her venture, was able to solicit the services of a shoemaker, who she says assisted in the manufacturing of her footwear.

Little by little, her business started to grow by word of mouth, and in time, she was selling her sandals to customers in the United States by way of mail order and couriers.

Although this added to her cost of sales, Moore said she was grateful for the growth, which allowed her to employ workers.

On average, Lynmoore's now makes 100 pairs of sandals each month, which are sold across Jamaica and delivered by courier to customers, and to overseas customers by mail and air courier service.

Marlene is very optimistic about the continued growth of her business, but knows she lacks visibility.

"The fact is, women will always be needing footwear, and Lynmoore's Sandals are comfy and cushioned, very soft, so they won't hurt your feet if you have to stand for long periods, and above all, they are very affordable."

Her sandals retail for around $5,000 per pair upwards.

On the advice of Sister Ink, an organisation which provides business consulting, management and support with entrepreneurs and small and medium business enterprises, Lynmoore's is now trying to expand.

The search is on for a central location from which to produce and sell the sandals, and Moore is weighing the expansion of her line of footwear to target men, and diversification of the product range to include crocheted dresses and bags.

Since she launched into business in 2012, all the financing poured into the business has come from Moore herself. She declined to speak to her finances, but noted that she is open to outside investors.

Ultimately, she wants to make a more serious run at the export market in the North America and Europe, instead of the one-off orders that she fills now.

The first step in the process is relocating to a more convenient shop space, which she says should happen in two to three months.

In the meantime, she is seeking out export workshops, where the Financial Gleaner first caught up with her, and planning the official launch of her business, set for July 1.

"The launch will be a way for me to fully put myself out there," said Moore.

"I've been around since 2012, but a lot of persons don't know about Lynmoore's Unique Crochet Sandals. I will have my sandals on display in the different styles and also my other items. Persons will get a chance to see what my work is about," she said.

Once she moves into her new shop, Moore says she plans to double her output.