Cedric Stephens | Insurance and clean-up costs after a disaster 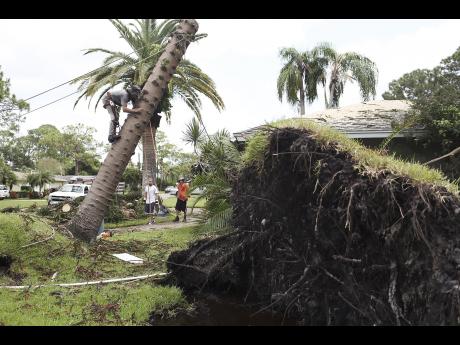 AP
Arborist Paul Mysliwiec climbs a tree that fell during Hurricane Irma in St Petersburg, Florida, Tuesday, September 12, 2017. Clean up after a big storm is costly and for Jamaica it may not be covered by insurance if the debris does not damage insured property.

Question: I saw photographs of the damage that Hurricanes Harvey and Irma caused in North America and in some Caribbean countries in that order. Many trees were blown down causing damage to houses, cars and other property. Would damage to a building or to a motor vehicle in Jamaica that was caused during a hurricane by a blown-down tree and the costs of cutting and removing it be considered hurricane damage by an insurance company? What would happen if the tree was blown but did not hit the building? Would the insurer pay for the cost of removing the debris?

INSURANCE HELPLINE: There is a big black mango tree in my frontyard. It is about 25 to 40 feet high. I have looked on it many times, especially during the current hurricane season, and wondered if it would pose a threat to the house if it were to be blown down during a storm.

My thoughts have not extended beyond that. I am yet to do anything about reducing the risk of it causing damage to my house. As for the insurance effects, I haven't thought about this before. Many thanks for spurring me into action with your question.

I vividly recall the almost total disappearance of trees from the Jamaican landscape after Hurricane Gilbert hit. The absence of leaves from those trees that remained standing was very depressing.

The aerial and other photos that I saw after Hurricane Irma hit several Caribbean islands and the southern parts of the United States - minus the extensive flooding - evoked those memories. They also reminded me of the loss of electricity, Lovindeer's popular song and the nasty surprises of some insurance consumers. The questions you asked were very timely. Even though Jamaica was spared the ravages of Category 5 Irma, at least one insurer that has its roots here transacts business in many of the countries that were affected.

Scenario planning is one of the ways that organisations think about and plan for the future. According to The Economist, Peter Schwartz in his book, The Art of the Long View, describes scenarios as "stories that can help us recognise and adapt to changing aspects of our present environment. They form a method for articulating the different pathways that might exist for you tomorrow, and finding your appropriate movements down each of those possible paths".

I propose to relabel your questions as separate scenarios and answer them in the order in which they were asked in an effort to remove uncertainty, because the hurricane season is not yet over.

Scenario 1: In the case of a building or other property that was damaged by a falling tree during a hurricane, the insured property would be the building. If hurricane was an insured peril, the insurer would be responsible for repairing or replacing the building. Provided that the contract included debris-removal costs - as many household policies do - the costs associated with the cutting up and removing all of the debris, including parts of the tree, would also be recoverable. In other instances, damage to the property insured caused by falling trees is expressly covered.

Scenario 2: If a tree or trees were blown down during a storm or hurricane and there was no damage to the insured property, the house, the costs of cutting up and removing the tree, and debris removal would not be paid. Those costs would be for the account of the householder.

Brawta: Jamaicans who migrated to Florida and assumed that the insurance situation there is similar to what happens in Jamaica are in for a very rude awakening. There are differences between the practice of insurance there and what happens here. Damage to buildings caused by blown-down trees and the debris-removal costs are treated similarly, for the most part.

On the other hand, while policies in Jamaica automatically provide protection for flooding caused by hurricanes, the situation in the US is very different. Hurricane damage there is limited to wind damage. Flood damage which is excluded by policies bought from private insurers, can only be purchased from the federal government.

End Note: In last week's column, 'Memo to Ministry of Economic Growth & Job Creation', I omitted to say that the standby agreement that our Government signed with the International Monetary Fund was regarded by both parties as "an insurance policy against unforeseen external economic shocks (for example, a natural disaster) beyond Jamaica's control", was indicated in the Fund's most recent staff report.

For free information or counsel, write to: aegis@flowja.com.