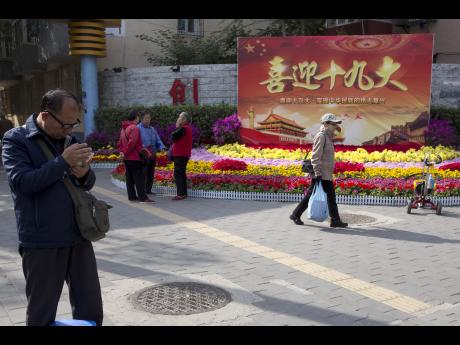 China’s largest political event in five years comes on the heels of single-digit growth, but underscored by plans that lean towards reduced poverty.

The 19th National Congress of the Communist Party of China, the CPC, opens on Wednesday, October 18. It will discuss four areas of political concern which will form the political basis for the economic growth over the next five years.

China has a goal of becoming a moderately developed country by 2025 and a key initiative includes lifting the standard of living in rural areas.

“No one should be left behind,” Tuo Zhen, spokesman for the 19th National Congress, said Tuesday evening at a press conference at the Great Hall in Beijing. “We are fully confident we will win this battle against poverty. March towards moderate prosperity together,” he said.

Between 2013 and 2016, the rate of poverty dropped from under 10.4 per cent to under 5 per cent, with over 30 million new jobs created. The Chinese government punishes officials who commit acts of manipulation of poverty alleviation statistics, Tuo said.

The four pillars for discussion at the CPC include drafting a political report on 21 key topics, amending the party constitution, electing some 2,280 delegates, and taking steps to elect a new central committee as well as a central commission.

“The Chinese economy is watched by the world,” the spokesman said, within the context of China’s new focus, in part, on supply-side structural reform.

Despite the reduced pace of growth, China continues to build mega-cities, while lifting millions out of poverty each year. China’s largest export cities, including Shenzhen, are growing at a geometric pace. Hundreds of cranes zigzag that city.

Part of China’s growth strategy includes mega-projects in more than 70 developing countries through an initiative called, One Belt One Road.

“Reducing leverage and stabilising growth should not be seen as in conflict with each other,” said Tuo.

“We have followed proactive steps to reduce leverage while reducing poverty. To ensure that deleveraging would not have a negative impact on economic growth. Initial progress has been made in reducing leverage and it has not had a dampening effect on the economy,” he said.