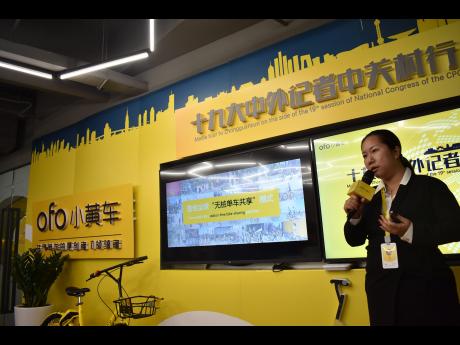 Trendy companies in China are expanding into the west with spillover implications for consumers in Jamaica.

From bicycles to drones to smartphones to mobile air conditioning units, the growth of these brands represents the movement of China from manufacturing on behalf of global brands to exporting its own brands.

"We want to unlock every market," said Nicole Nan, vice president of the bike sharing company, Ofo, on a tour with Latin American and Caribbean journalists last week at the Ofo branded skyscraper in Beijing.

The company started operations in 2015 at Peking University in China. It now claims 65 per cent market share in its home market. Outside of China it operates in a number of countries including Australia, Austria, United States. Japan, Portugal, Singapore, Malaysia and Russia, according to Nan. The company has over 10 million bicycles, in 180 cities and unlocks 25 million rides per say.

"We may offer franchises one day," said Nan in response to a Gleaner Business query on whether local investors or educational institutions could approach Ofo directly.

She indicated that the Latin American region would eventually become an area for expansion.

Customers unlock bikes by scanning a QR code on the bike itself, which automatically engages payment with their mobile wallet. It is part of the sharing economy and these bikes are often in use in major cities along with rivals such as Mobike. At the end of a journey, the rider locks the bike with the smartphone and gets charged the equivalent of under US$1 per hour. But the rates are even cheaper in China.

Ofo, founded by Dai Wei, completed its fifth round of funding at some US$700 million from investors, including the Alibaba Holding Group in China. Apart from the pursuit of profit, the company aims to reduce carbon emissions and save parking in cities - a huge unavoidable issue in Beijing.

It represents the evolution of Huawei's revenue streams from mobile into the internet of things and also video technology.

"We want a larger slice of video," said Huawei public relations manager, Benjamin Howes, in response to queries during the media tour in Shenzhen. Huawei estimates the global video market to reach US$1 trillion by 2020, and the global mobile market to mature at US$1.7 trillion.

Part of that drive for Huawei to expand its revenues includes the distribution of its own 8K ultra high definition or UHD TV. Comparatively, Jamaica is just testing 4K UHD TV.

The more immediate products that will likely enter the Jamaican market in 2018 includes the Mate 10 phone launched this month in China, said Howe.

DJI Limited, described as the world's largest drone company, expects to enter the Caribbean with authorised stores within two years.

"We already distribute to all the countries in the region and we are expanding aggressively," Cinzia Palumbo senior brand manager told Gleaner Business in Shenzhen.

The privately owned company claims to hold 70 per cent of the global drone market but declined to reveal its valuation.

Accounting firm PwC expects the global drone market to grow to some US$130 billion by 2020.

DJI already operates stores in Latin American, which Palumbo said they plan to double by yearend. Brazil is the company's largest regional market, but it plans to open more stores in Colombia.

"The innovation in Shenzhen, China is many times more than in Silicon Valley. This is the best place to work," said a software engineer in his early 30s who called himself Felix, and spoke to Gleaner Business while in transit from his hometown to Shenzhen.

For this year, January to August, trade between China and Latin America & the Caribbean rose 18 per cent to US$166 billion.