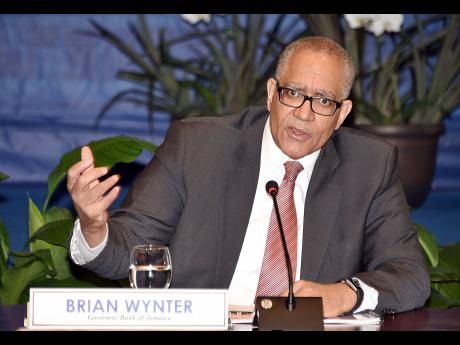 Governor of the Bank of Jamaica, Brian Wynter.

Investors in a US dollar-indexed bond issued by the Bank of Jamaica (BOJ), last year had a negative return of 1.15 per cent on their investment because of the appreciation of the Jamaican dollar between last September and January.

BOJ Governor Brian Wynter made the revelation as a warning to persons betting on a persistent downward slide of the dollar.

He said that the recent behaviour of the foreign-exchange market has been characterised by two-way movements. "We expect this behaviour to continue," the central bank chief said at his quarterly press briefing on monetary policy.

The Jamaican dollar appreciated against the USD by 3.8 per cent during the December quarter, a trend that continued into the first week of January 2018, he said.

Since then, the market has entered a new phase, with the JMD again on the decline.

"We invite stakeholders to take careful note of some of the effects of the new reality of two-way movements to the exchange rate," said Wynter. "Participants who before had built long positions in foreign exchange have begun to learn that these positions, seen by many as an obvious way to retain value, can actually cause them to lose money."

The new reality favours investors and savers who take a more balanced approach to the acquisition of foreign exchange and foreign currency-denominated investments, Wynter added, citing the performance of the BOJ bond.

"When the bond was fully repaid in accordance with its terms at maturity last month, on January 30, 2018, investors found that, instead of earning a moderate interest rate together with a sizeable capital gain based on the anticipated depreciation of the Jamaican dollar, they in fact lost money, with a negative return of 1.15 per cent," the governor said.

"Effectively, they paid Bank of Jamaica to keep their money for a year," he added.

The bond offered US$50 million to investors with a tenor of 365 days at an interest rate of 1.50 per cent per annum.

Interest was to be paid quarterly for those payments, and at maturity, the applicable exchange rate would be the BOJ 10-day average selling rate multiplied by a factor of 1.001.

Wynter said that the new reality means that banks and other financial institutions are in a better position to offer reasonably priced insurance or hedging tools to customers who do not want or cannot bear the short-term risks presented by the two-way movements in the exchange rate.

"Removing the assurance that you cannot lose by simply buying and holding foreign exchange means that investors have more incentives to put their money into Jamaican dollar-denominated, growth-oriented investments," he said.

Two-way movements in the exchange rate also mean that the pass-through from depreciation to prices is more muted, the central bank governor said.