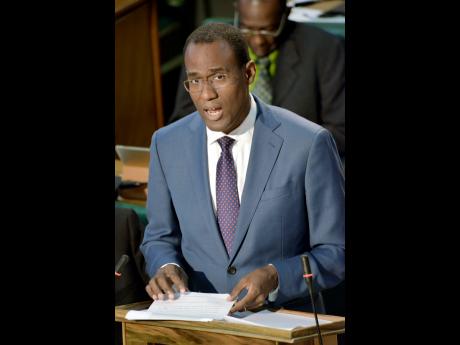 The Government has approved the tabling of regulations that will effectively depoliticise the boards of public-sector bodies by, among other things, ensuring that a third of those appointed by a previous minister or administration be carried over to a new board.

"When you serve on a public board, your role and function is not allegiance to a party or to the party that formed the Government when you were appointed. Instead, your allegiance is to the instrument of your appointment, the governance principles on which you were appointed and, by extension, to the people of Jamaica," said Finance and the Public Service Minister Dr Nigel Clarke, in making in the revelation that Cabinet approved the proposed changes in May.

As such, transparency, diversity and continuity will be key watchwords regarding the appointment of future boards of public-sector bodies going forward, the minister indicated.

Bemoaning the state of the decades-old system of appointment to boards, Clarke told members of the Montego Bay Chamber of Commerce and Industry last week that it is informal, relies on the memory and personal contacts of the minister, the permanent secretary and advisers.

"It is inefficient and ineffective. It doesn't allow for suitable diversification, nor for the range of skills necessary to be represented on each board as no minister, no Cabinet has names of 2,000 persons at their fingertips, classified by competence, qualification and experience," Clarke charged.

He said that on May 28, Cabinet approved a set of policy guidelines for the nomination, selection and appointment of the boards of public bodies in keeping with its commitment to public-sector reform, good governance and societal equity,

Clarke says that under the present system of appointment, there are approximately 190 public bodies each with board membership ranging from a low of seven to a high of 17 persons, noting that incoming administrations could struggle to adequately to fill more than 2,000 board positions on a change of Government.

He says that going forward, ministers, in making appointments, will be guided by a confidential database of prospective candidates or board appointments maintained by the technical secretariat at the Ministry of the Public Service. Those appointments will be in keeping with the competency profile of the particular public body. Persons known to a portfolio minister, permanent secretary or adviser could be included, but if they are not in the database, they will be required to complete an application for submission to the secretariat for inclusion in the database prior to selection.

Clarke says that in reviewing the shortlist to make the final selection to a board, the minister will be required by regulation to be guided by the principles of competence, availability of time and commitment and diversity to include gender, youth and experience. The regulations will call for a minimum representation of 30 per cent of each gender on every public board. In addition, a minimum of 25 per cent of the board must be considered independent as defined in the regulations. Directors' appointments will also be limited to three public bodies, of which chairmanship will be restricted to only two.

Cabinet has also given the go-ahead that the policy be fast-tracked, according to Clarke. He says the guidelines will move immediately to the drafting stage, whereby they will go to the chief parliamentary counsel and will be converted into regulations that will accompany the Public Bodies Management and Accountability Act. The draft regulations, once tabled, will be subject to affirmative resolution in Parliament, the minister said.

Clarke said under the new policy, there will have to be a better understanding of the different roles of the respective boards and public-sector bodies. He noted that boards are put in place to oversee public bodies, but not to run them, pointing out that sometimes those roles are confused and boards take onto themselves the role of policymaking or management, both of which are inappropriate.

"As we move to this more professional, more objective and modern system of governance and accountability and will have a third of the members of a board being carried over from a previous set of board members, appointed by a previous minister, or even a previous administration, it will be crucial that board members understand what their role is," he said.

"So as we seek to have, on one hand, greater transparency, accountability and modernisation, bringing Jamaica into the 21st century, it has to be balanced by greater professionalism on the part of those who serve on public boards and greater fidelity to their role and function," the finance minister said.