Tropical Battery returns to core with focus on energy storage 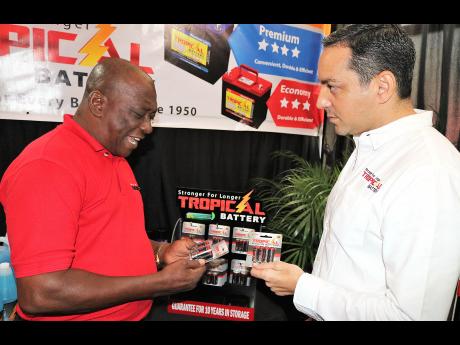 Battery distributor Tropical Battery is returning to core business and broadening its involvement at that level, backed by capital from Portland Caribbean Fund II.

Consequently, the 68-year-old company is backing away from forays into tyres and lubricants, while going after a new segment in the battery market.

Vice-president for Sales and Marketing Daniel Melville says the company has a 'white labelling' arrangement for alkaline batteries that will be sold under the Tropical Battery brand. White labelling refers to an arrangement under which one company produces a product while another sells it as its brand.

Tropical Battery quietly introduced the batteries recently. They come with the same 10-year shelf life as top brands on the market but will be sold at about 40 per cent less, Melville said.

"We're not trying to take over the alkaline batteries market, but we're making sure to offer this as one of the viable solutions in the energy storage market," Melville said.

In June 2017, Portland Caribbean Fund II invested US$8 million in Diverze Assets Inc, the Melville family owned holding company for its Tropical Battery and Chukka Cove businesses. Then in March of this year, Fund II, which is managed by Michael Lee-Chin's company Portland Private Equity, made an additional investment in Diverze but has not disclosed the size of that injection.

Tropical Battery at one time manufactured batteries, but moved away from that, relying instead on imports.

GONE BACK TO CORE

Melville says the company has always supplied a full range of lead/acid batteries, but is now finding that the market is demanding a greater level of sophistication and a wider range of batteries for motor vehicles.

"We've really gone back to our core, and with that, we have expanded from that core instead of branching off into other areas. What we are talking about now is energy storage," he said.

"We're looking on a much broader picture, not just batteries but systems on a whole that would be supportive to it. We still sell coolant lubricants because those will assist with keeping the engine cool and running optimally so that the batteries we deliver to customers get to operate in a more hospitable environment."

"We're changing with the times and making sure we are ahead of the rest of the curve while keeping to our core of energy storage which is where we see the business will continue to grow for the next 10-15 years," Melville said.

The funds from Portland were used to boost inventory, he told the Financial Gleaner.

The company's Grove Road and Ashenheim Road locations have been refurbished, the vehicle fleet refreshed, and in 10-12 months, the company will a new location at Ferry on the outskirts of Kingston.