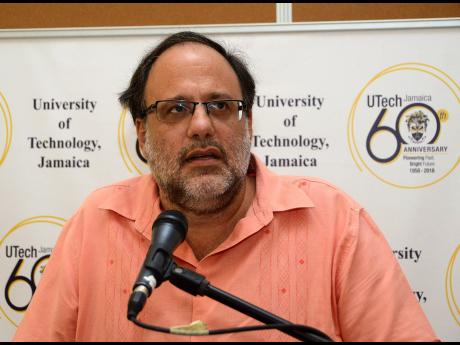 Fearing backlash from foreign banking partners, local lenders are reluctant to do business with the emergent cannabis industry.

Senator Mark Golding, a former minister of justice and now opposition spokesman on finance, is pitching to industry interests - those with legitimate permits - the idea of banding together as a cooperative and launching a 'ganja credit union'.

"It is an idea that I think needs to be explored. As is to be expected, the local banking community is not prepared to provide banking services to the regulated medical cannabis industry in Jamaica, therefore, another method or solution has to be found to enable the industry to grow," Golding said, who initially raised the issue at a medical cannabis symposium.

He proposes that the Cannabis Licensing Authority take the lead on the issue, saying the regulator should encourage its licensees to form their own lending institution.

"That would cover all those with licences, from cultivators all the way through the supply chain to processors, transporters and even those doing research," said Golding, said.

The Bank of Jamaica, which is in the process of taking over the regulation of credit unions, has not weighed in directly on the issue, but the Department of Co-operatives says the idea is already under active consideration.

"We examined that very question, and in looking at what obtains in places like Colorado and Texas, what we found is that they do have instances where they do some ganja business in terms of taking deposits from legitimate, regulated businesses in an open and transparent way," said Executive Director Errol Gallimore.

"But those credit unions had a cheque account clearing facility, whereas ours don't," Gallimore said.

Golding suggests that correspondent banking concerns would be allayed if all payments are handled within the credit union system, with the Bank of Jamaica acting as their bank. It would provide a legitimate channel for the regulated players in the industry to do business both locally and internationally, he said.

"The central bank would provide the banking services and take care of arrangements in cases where, for example, those that are exporting under licence, provided that the importing home jurisdiction authorises the transaction, then payment can be made through an arrangement that ensures that all is above board and properly monitored. The Bank of Jamaica and the CLA could provide oversight," Golding told the Sunday Business.

Maurene Simms, the BOJ deputy governor with responsibility for supervision of financial institutions, skirted around the idea of the central bank acting as a banker for a ganja credit union. Instead, she reaffirmed the central bank's legislated role, including its role in the clearing system.

"Bank of Jamaica plays a key role in the payment and settlement system by providing clearing services to commercial banks to facilitate settling of their obligations, including their customers, drawn on each other's account. In this regard, Bank of Jamaica operates current accounts for clearing banks (commercial banks) through which settlements are executed and their cash reserve requirements managed," Simms said.

Gallimore says that for the ganja credit union idea to gain traction, it would require the Ministry of Finance and other relevant ministries taking a policy position on it.

"Indeed, in doing that we would also have to consider the PC Banks, since they are the ones concerned with agriculture. You can't very well allow the credit unions and not the PC Banks," he said.

Golding himself says Audley Shaw, whose portfolio spans industry, commerce and agriculture, should put together a team with the necessary expertise to examine the possibilities.

"It is better for the relevant agencies to approach the matter with a solution orientation rather than to find a reason why it can't work. Even if that particular solution doesn't ultimately turn out to be the one I think, the purpose of investigating may yield other possibilities or variations that may prove workable," he said.