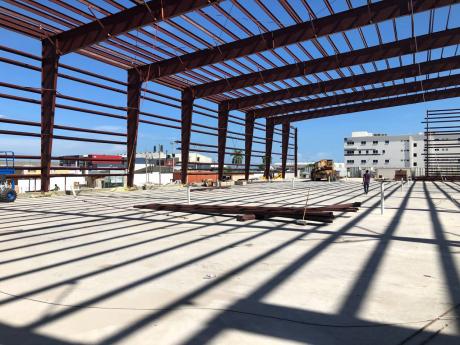 The ongoing 60,000-square foot warehouse project under way at the CPJ Campus at Montego Freeport.

Food and liquor distributor Caribbean Producers Jamaica (CPJ) earned less profit this year, but CEO Dr David Lowe says it's all linked to expansion projects and technology upgrades that are set to grow the company.

In the Montego Bay-based company's annual results ending June, there was a bright spot a more than one-tenth increase in sales revenue. However, as Lowe explained it, the gain failed to reach the bottom line because of expenditures linked to the warehouse project that is currently being finalised, new IT investments, and CPJ's forays into the Caribbean.

Lowe, in putting a positive spin on the company's southward profit drift, pointed to its expanded operations regionally, where it has been investing in a production and distribution chain to feed island markets in the eastern bloc.

"Our reorganisation is paying dividends as you can see in the tremendous growth we've had offshore. We're fuelling growth because of expansion, so obviously it's going to take a while for those things to catch up," Lowe said in an interview with the Financial Gleaner.

CPJ made annual net profit of US$2.31 million but that underperformed the previous year by nearly 11 per cent, when profit amounted to US$2.59 million. It comes two years into a three-year programme of reorganisation.

Revenue increased nearly 11 per cent, from US$98 to just under US$109 million. But CPJ's combined cost of business and operating expenses for marketing and administration were US$10 million higher.

The company, Lowe says, in the second year of the restructuring plan saw an increase in activity with a realignment of the company's portfolio of products, and an expansion into frozen foods. CPJ distributes over 4,000 products from its 130,000-square foot operation at Montego Freeport, the recently commissioned 60,000-square foot St Lucia operation as a hub.

CPJ's main market is the hospitality sector, both in its home market and overseas. Lowe says St Lucia is growing rapidly as a tourist destination and with the new investment, CPJ has the early-mover advantage.

"We've grown onshore in St Lucia and that acts as a hub for further exports in the region. We're exporting from St Lucia to Antigua and Barbados," he said, while hinting at more developments to come.

"I don't want to say too much before I can but we're looking at opportunities beyond there," he said.

Meanwhile, the Freeport operation is being upsized by nearly 50 per cent. Lowe says with the new facility, the company has created a CPJ Campus by getting permission to close the street that intersected its properties. The new facility, a 60,000-square foot warehouse, represents major spend that will do more than expand the CPJ footprint, Lowe says.

"This will now include administrative offices manufacturing, distribution and warehouse operations. The hard spend is US$2.5 million and will further enhance what we believe is a world-class distribution facility," he said.

Lowe says additional operating expenditures over the past year aligned with a five-pronged mandate of having the best business, best people with the best fit, best practices, best customers and best products.

The company, he said, would continue to operate at the higher end of the market segments it serves.

He added, however, that even as CPJ spent more on expansion and restructuring, it also explored areas of savings chiefly a debt restructuring programme under which Scotiabank granted the company a $500-million unsecured loan used to retire US-denominated debt.

CPJ has also embarked on a restructuring of its staffing, which included redeployments as well as job separations. Lowe would not disclose, however, how many jobs were shed, saying only that they numbered "in the low double digits".

Chief Financial Officer Jan Polack resigned her post at the beginning of August. She is being replaced by Vivek Gambhir, a 25-year veteran in banking, finance and the food service industry.