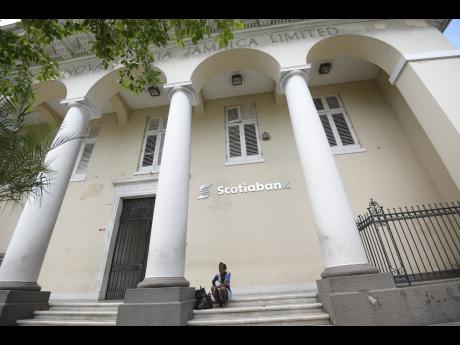 Gladstone Taylor
A Scotiabank branch is pictured in Kingston. Jamaica is unaffected by the sale of Scotiabank's Caribbean assets, but the Jamaican life insurance business is being sold to Canadian investor Aligninvest.

Scotiabank Canada announced an agreement Tuesday to sell its banking operations in nine markets in the Caribbean to Republic Financial Holdings Limited of Trinidad & Tobago.

Republic Holdings said it would spend US$123 million for the acquisition.

"The purchase price represents a US$25-million consideration for the total shareholding of Scotiabank Anguilla Limited and a premium of US$98 million over net asset value for operations in the remaining eight countries," Republic Holdings said in a market filing in Trinidad.

The agreement is subject to regulatory approvals and customary closing conditions. But already, the prime minister of Antigua and Barbuda,

Gaston Browne, has expressed disappointment at the sale of the bank in his country.

Browne went further on Wednesday to advise the Eastern Caribbean Central Bank that it would not approve the transaction "until other options for divestment are explored, particularly providing a consortium of local banks the right of first refusal to acquire the Antigua and Barbuda operations".

Guyana, too, has noted its misgivings about the deal, saying it would further concentrate ownership of banking operations in that country in Republic Bank, a subsidiary of Republic Holdings.

The Guyana Ministry of Finance, while noting that it would review the transaction, said Republic Bank currently holds 35.4 per cent of the banking systems assets and 36.8 per cent of deposits, and its acquisition of Scotia would grow that to 51 per cent of both assets and deposits.

Scotiabank's large Caribbean markets, including Jamaica and Trinidad & Tobago are unaffected by the sale. However, those two markets are disposing of their insurance businesses, which will be taken over by the respective Sagicor subsidiaries in those countries. Alignvest is spending US$240 million on those acquisitions.

Republic Financial has operations across the Caribbean and Ghana. As part of the proposed deal, Scotiabank employees in the nine countries will join the Republic Group.

Scotiabank Canada operates a chain of banks in 50 countries that serve more than 25 million customers.