Most of NIDS loan to be used for tech upgrades 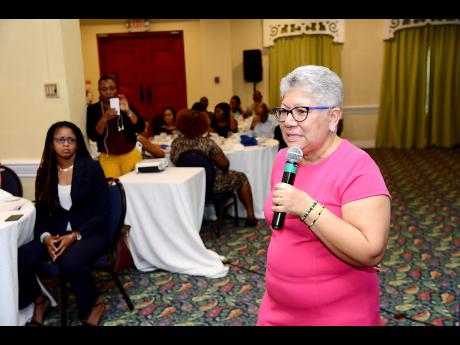 Rudolph Brown
Chief Technical Director in the Office of the Prime Minister, Jacqueline Lynch-Stewart (right), makes a presentation on the National identification System, NIDS, to the Jamaica Chamber of Commerce at a JCC Breakfast Conversation forum held at Knutsford Court Hotel, St Andrew on Thursday, December 13, 2018.

Most of the US$68 million the Inter-American Development Bank has approved for Jamaica's controversial National Identification System (NIDS) will go towards upgrading the information and communication technology infrastructure across government.

Chief Technical Director in the Office of the Prime Minister, Jacqueline Lynch-Stewart, who is steering the NIDS project, said 80 per cent of the loan will be used to upgrade and modernise systems at the Registrar General's Department, Passport, Immigration and Citizen Agency; the Ministry of Labour and Social Security's system for the Programme of Advancement through Health and Education or PATH, as well as eGov Jamaica, the entity that manages the Government's data.

"The fact of the matter is that we are now living in a digital world and we can't just hop off and say we are not going to participate. What we have to do is prepare ourselves as a country to be in that space," Lynch-Stewart told a forum organised by the Jamaica Chamber of Commerce on Thursday.

Pointing to the challenge by the Opposition People's National Party to aspects of the NIDS legislation in the Supreme Court, she said they are awaiting the judgment "so what we plan to do is subject to the decision of the courts".

"We need a national ID for ease of doing business. Because the ID is going to verify who you say you are, you are not going to need to provide more than the one ID to do business," she said, adding that "the days of trying to find a JP (justice of the peace) to give you a reference will be in the past."

Lynch-Stewart suggested that the reason why many places, such as banks, ask for more than one form of identification when doing business with them "is because they are not sure whether what you are giving them is authentic".

She said NIDS "will allow us to enter the digital space in a more secure way. Yes we are here, doing business online. The banks in particular have been the leaders in this area and other businesses have followed, but we in government also want to allow you to do business with us online from start to finish."

She continued: "What we want is that we deliver a better and more efficient service to citizens and therefore the citizen will have a choice whether to go in your car, on a bus, through the traffic, to an agency to do business, join a line, spend two or three hours as opposed to sitting behind your computer and doing the same business at that government agency."

Lynch-Stewart said the idea is that the government will eventually modernise and all services will be offered online similar to what the private sector is now doing in many cases.

NIDS will also result in a reduction in cost within government to maintain so many different databases, she said.

The National Identification and Registration Authority will be vested in the RGD. "We are modernising RGD. A lot of the project money in NIDS is being spent to upgrade RGD, giving them a new civil registration system as well as to digitise all the records," said Lynch-Stewart

"This is major because RGD has not had any capital injection for years. We all complain as citizens about how long it takes for them to do anything. To be fair to them the reason it take so long it because it's a minute amount of the records that are digitised so they have to do searches manually which takes a lot of time and effort. So the project budget, a lot of it is going into modernising and transforming RGD," said the Chief Technical Director.

She said that in collecting data for NIDS, the authorities will not collect DNA, information on political affiliation, sexual orientation, financial information and criminal records.