The Conversation | Who is responsible for migrants? 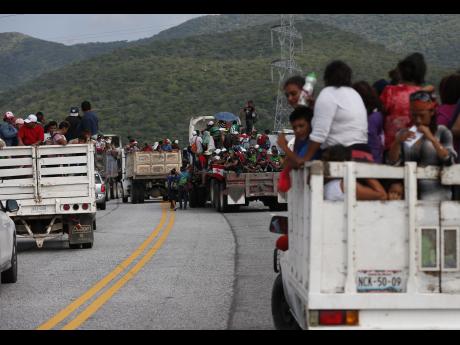 AP
In this November 1, 2018 photo, migrants hitch rides in the back of trucks as the thousands-strong caravan of Central Americans hoping to reach the US border. AP

US President Donald Trump tends to portray migrants as a foreign problem that has suddenly and unfairly - been "dumped" at America's doorstep.

Migration "is a way they get certain people out of their country and dump in US", he wrote on November 25 about a caravan of mostly Honduran women, children and young men seeking asylum in the United States.

He is not alone. The flow of refugees and asylum-seekers from poor countries to the United States border is often attributed, incorrectly, to domestic unrest in a far-off nation. Some Americans blame far-off governments for not being "willing to take care of their own country's problems", as one New York Times reader commenting on the migrant caravan put it recently.

This one-sided view of migration ignores the global forces that bind our world together, my research on immigration policy shows.

The extreme violence, environmental disasters and grinding poverty that drive people from places like Guatemala, Honduras and Afghanistan are largely the result of global phenomena like colonialism, climate change and trade.

Seen through an international lens, both migrant-sending and migrant-receiving countries share responsibility for the people displaced by globalisation.

It's no coincidence that immigration routes today follow the same path European colonisers did but in reverse.

France invaded Algeria in 1830 and kept it as a colony until 1962. Today, the largest immigrant group in France is Algerians.

And while Britain today may wish to close its borders, in 1948 it invited citizens of former British colonies into the country to help the United Kingdom rebuild after World War II. Indians and Pakistanis are now the second- and third-largest immigrant groups in the United Kingdom, after Polish people.

The Central Americans looking to the United States for refuge are following a similar historical pattern.

Technically, the United States was never an empire. But its government consistently intervened in Latin American domestic affairs during the late 20th century, installing and even removing leaders across the region.

In the 1980s, hoping to beat back Communism, the US funded and armed authoritarian regimes in Central America as they battled leftist guerrillas. These decades-long civil wars killed thousands and displaced hundreds of thousands.

War also killed the region's economy. Average income in El Salvador, Guatemala, Honduras and Nicaragua was actually lower in 1990 than it had been in 1980.

More international trade in recent decades has brought jobs and improved living standards in some countries among them Chile, China and South Korea preventing migration by creating the economic conditions that allow people to stay put.

Strategic agricultural aid to developing countries, too, has reduced emigration from some rural countries, according to a recent study in the journal World Development, which analysed data from 103 countries that received aid from 1995 to 2010.

Mexican immigration to the US surged after the North American Free Trade Agreement went into effect in 1994. The deal increased Mexico's manufacturing sector substantially but it hurt farmers by opening Mexican markets to subsidised US agricultural products.

Unable to compete with these cheap imports, hundreds of thousands of Mexican farmers lost their jobs. By 2006, an estimated 2 million peasants had been pushed out of rural areas in Mexico. Many of these displaced farmers migrated to the US, where they found jobs in the construction, agricultural and restaurant sectors.

Today, Hispanics make up around a quarter of workers in those industries. The same low-wage immigrant labour helps to keep manufacturing afloat in the US despite the otherwise high costs of doing business.

Trump insists only that cheap imports from developing countries threatens US industry. The realities of migration are more complex and nuanced than that.

Climate change is another global problem contributing to the migration crisis.

Global warming-related problems like rising sea levels and extreme weather have their origins in the Industrial Revolution in Europe 150 years ago. But their impacts are hitting poor countries first and hardest.

Residents of small Pacific islands such as Kiribati and Tuvalu must abandon their homes because coastal erosion is pushing people inland, creating conflicts over the scarce remaining dry land.

Even Central American migration is linked in part to climate change. Changes in temperature and rainfall across the region have damaged the coffee and maize crops over the past decade. Some farmers who've lost their rural livelihood joined the caravan earlier this year.

And though China has surpassed the United States as the world's largest emitter of greenhouse gases, people in rich countries still use a disproportionate share of global resources.

Per capita carbon emissions in high-income countries is about 30 times higher than in low-income countries because people in the richer countries have bigger and more air-conditioned homes, eat more meat and drive and fly more.

Such statistics raise serious doubt about who, exactly, should take responsibility for modern climate refugees.

Rich countries are not to blame for every problem that drives migration from poor countries.

Corrupt, predatory and violent leaders in Central America, Syria, Pakistan and many other places are also accountable for creating hazardous conditions in their countries.

And Haiti's devastating 2010 earthquake, which destroyed the nation's capital and sent thousands fleeing for their lives, had nothing to do with climate change.

Still, too much political rhetoric out of Washington offers a simplistic, one-sided view of migration. A more balanced debate might help policymakers take measures that might actually address the problem, rather than just casting blame on poor countries and closing borders.

Other countries increasingly agree. On December 10, some 164 nations signed the Global Compact for Migration, the world's first-ever comprehensive international agreement. It assigns shared responsibility for hosting migrants in ensuring their human rights are respected and addressing the root causes of displacement.

The United States was not one of them.

- Written by Felipe A. Filomeno, University of Maryland, Baltimore County.