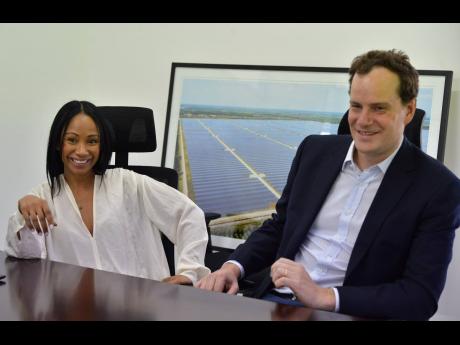 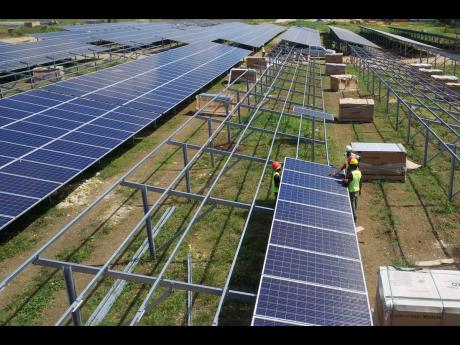 The Paradise Park Solar Farm under construction in Westmoreland.
1
2

Eight Rivers Energy Company, the entity set to operate the Paradise Park Solar Farm in Westmoreland, says the project is half-complete and due for commissioning by the second quarter of this year.

Neoen, the French partner with the biggest stake in what will be Jamaica’s largest solar facility, has set up offices in Kingston with the expectation that it will be taking on other projects in Jamaica.

“Construction is well under way with critical milestones such as design, procurement and core logistics already complete,” said chairman of Eight Rivers Energy, Angella Rainford, in a joint interview with the Financial Gleaner from Neoen’s offices on South Avenue.

Paradise Park’s shareholders include Neoen, with 50 per cent; MPC Capital of Germany, 34.4 per cent; and Rainford’s company, Rekamniar Frontier Ventures, 15.6 per cent. Rainford is also the ­managing director of Rekamniar.

Noeon and Rekamniar, both of which have been in business for seven years, have plans to collaborate on future energy projects in Jamaica. Neoen already operates several renewable energy projects across various countries.

“We are interested to expand our presence in Jamaica and do more projects,” said Gregoire Petit, international development ­manager at Neoen. The options include bidding on government and private-sector renewable ­tenders, he said.

“We are long-term investors in Jamaica,” added Rainford.

At the start of February, Rainford and Petit oversaw panel installation work at Paradise Park, which, when complete, will sport 156,000 solar panels across 81 hectares. The project currently has 160 workers on site and that figure will rise to about 300 at the peak of construction, said Petit. At ­commissioning, the facility will employ 20 workers to operate the plant.

The development of the solar park was plant was farmed out to French company, Eiffage, and Schneider Electric under the supervision of Neoen. The initial half of the project took more time to execute because of the finalising of funding, pre-site preparations, and panel importation, the partners explained.

Eight Rivers currently has no position of CEO, said Rainford. The company is overseen by a board that she heads. Neoen has three representatives on the board, while MPC Capital has one.

Eight Rivers Energy Company Limited will own and operate the solar plant, which aims to produce base supplies of 37 megawatts of base power supplies, 51.5 MW at peak. That capacity is nearly twice that of the largest 20MW plant ­currently in operation in Jamaica, and would also make Paradise Park the largest solar plant in the English-speaking Caribbean, said Rainford.

The solar plant is expected to reduce carbon emissions by 30,000 tonnes per annum, which would be equivalent to taking 7,400 cars out of commission for a year.

Preparatory works for the solar farm began in September 2017 but construction started nearly a year later in June 2018, after financial close.

The yearly output from the plant is expected to average 82 gigawatt hours of power. Eight Rivers will sell electricity to the national grid at 8.5 US cents per kilowatt-hour under a 20-year power purchase agreement with grid operator Jamaica Public Service Company.

The solar project was initially a joint venture between Neoen and Rekamniar, each holding an equal stake. Rekamniar later sold a 34.4 per cent stake to MPC Capital. The German company, which names Paradise Park as one of its key regional assets, listed a company called MPC Caribbean Clean Energy on Jamaica’s stock exchange in January.