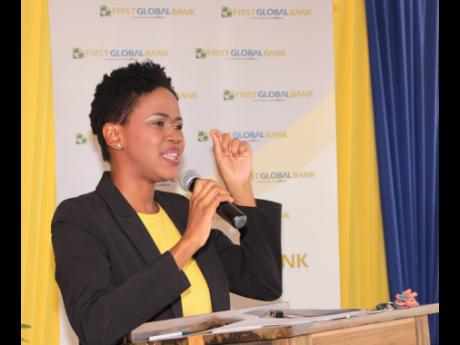 First Global Bank has created a hub to serve small and medium enterprises that are attempting to scale up their operations.

President and CEO Mariame McIntosh Robinson, who announced the creation of The FGB SME Hub at First Global annual SME conference , said the agriculture, manufacturing, hospitality, BPO and retail sectors were being targeted.

One of the services to be provided by the hub is non-collateralised loans that are guaranteed by the Development Bank of Jamaica.

The package being offered through the hub also includes information on what is needed for financing to scale business; access to SME loans tailored to each industry and connections to technical help and advisory services within the bank, government agencies, and tax professionals.

McIntosh Robinson said the bank was also offering its SME clients credit cards at the “competitive rate” of 42 per cent per annum with a credit ceiling of $15 million. And this week First Global rolled out a mobile point-of-sale machine for entrepreneurs, becoming the second commercial bank to do so in less than a year, after Sagicor Bank which introduced Swype in June 2018.

First Global did not disclose the range of interest rates that the hub would charge, but said the loans come with “customised rates and terms”.

Last year, the bank lent $1.4 billion to SMEs, which reflected an eight per cent spike in business in that segment of its loan market.

First Global, said McIntosh Robinson, was becoming known as the chicken farm bank, and was the biggest lender in that sector. It can cost a farm $40 million to $50 million to construct its chicken coops, she added.

On Wednesday, Jamaica’s third smallest of eight commercial banks brought together SMEs and entrepreneurs who shared their success stories, combining this with information on how to scale businesses.

Chris Dehring, CEO of ReadyTV told the audience that his former business SportsMax, which he sold when the sports channel’s reach had extended to 26 countries, had started out transmitting from a computer in his living room.

The entrepreneur shared the story of how he was able to sell bankers the idea that sports rights were bankable. Today, he says, sports rights are the most valuable intellectual property in the world, with the Indian Premier League, for example, hauling in US$4 billion for “just six weeks of cricket”.

Small companies trying to grow tend to face challenges recruiting the right talent, for example chief financial officers, the best of whom are “very thin” in the region, said Dehring.

“As soon as you make an offer, their employer makes a better offer to keep them,” he said. He suggests companies can get around the problem of recruiting talent by offering equity in their companies.

“Get somebody who is totally committed, with a vested interest,” he said.

Michael Campbell, the owner of Island Car Rentals, says he sees every problem as an opportunity, citing the example of how he got into the car rental business.

While principally invested in real estate in the 1970s, Campbell leased space to a car rental company to cover mortgage payments on one property. He subsequently discovered that the company was going out of business and took it over.

Four months later, the government of the day decided to stop the importation of cars into Jamaica. His response was to purchase a second-hand fleet from Avis.

Campbell also noted that he consistently hired people “who could do the job better” than himself, and kept them on board by treating them “like family”. Most of his managers, he said, have been with Island Car for over 30 years.

Christopher Issa, owner of the S hotel in Montego Bay and Spanish Court Hotel in Kingston, said he loved hiring young people and that most of his managers fell into that bracket. The young, he indicated, were more trainable.

“When you say jump, they say how high?,” he told the conference.

The hotelier also encouraged SME operators to read widely, saying everything he has done as a businessman was a version of what he had seen elsewhere.