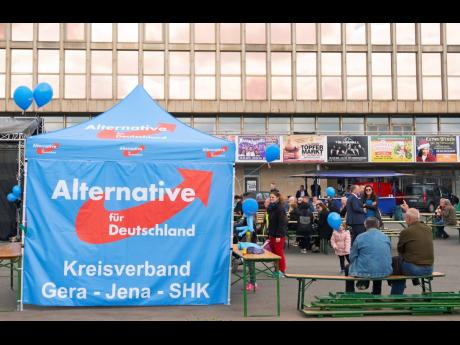 AP
People attend an event during the street Europe and communal election campaigning of the far-right Alternative for Germany in Gera, Germany, Friday, May 17, 2019. The words at the tent read: ‘Alternative for Germany’. The next elections to the European Parliament will be held between May 23 and 26.

In just under a week, voters from across the whole of the European Union will go to the polls to elect a new European Parliament.

The result is expected to alter Europe’s centrist balance, and more important contribute to the repositioning of all political parties, including those in France, Germany, and an already semi-detached Britain.

For nearly a decade, Brexit notwithstanding, far right and populist political groups have been gaining support. Where once one could reliably predict that citizens in most EU nations would largely vote on economic and national issues, electorates have become less predictable.

Angry with establishment politics and elites, marginalised by deindustrialisation and austerity, large groups of citizens and whole regions have turned to parties that have channelled their frustration by ­weaponising negative sentiment about migration and the defence of national ­culture and identity.

The effect has been the rise across Europe of new or reconstructed political groupings, including France’s Rassemblement National, led by Marine le Pen; Germany’s Alterativ für Deutschland; Vox in Spain; the Brexit Party in the United Kingdom, and Liga in Italy. It has also seen illiberal governments emerge in Hungary, Poland, and elsewhere, and the rise of vociferous factions openly expressing views that are xenophobic, racist, anti-Islam, or anti- Semitic.

Most pollsters suggest that in this European election, it will be the populist and nationalist parties that make ­significant gains.

Analysis by Politico suggests an outcome involving a significant shift to the right. The multimedia platform suggests that within the next 751-seat European Parliament, 388 of its members will represent centrist parties, 212 right wing parties, 123 will be left of centre, and 28 will come from other parties. It additionally believes that of those likely to be elected, 465 will be pro-EU, a sizeable minority of 257 will be Eurosceptic, and 29 will have an unclear position.

How accurate such forecasts may be could additionally depend on the hard-to-gauge influence of externally financed or directed third parties.

The expectation, therefore, is that the May 23 to 26 vote will result in a European Parliament that is less consensus driven, more fragmented, and will have a smaller pro-European majority.

More will become clear after the new Parliament convenes on July 2. Then, those elected by national ballot will have formed themselves into EU-wide parliamentary political groupings, of which there are currently eight. They will then play a role in what is expected to be a tense debate that will shape the appointment of Europe’s executive – the European Commission – and for the presidency of the council, the political body that brings together the EU’s member states.

Later as the parliamentary term proceeds, these pan-European political coalitions will influence Europe’s international relations, having the final say, for example, on development policy and the development budget, foreign and security policy, trade agreements, and whatever post-2020 treaty arrangements are negotiated with the ACP and its regions.

CARICOM states have always felt confident, for historic reasons, of their ability to exert political influence in Europe in these and other respects. However, the EU is on the cusp of change, not just as a consequence of Brexit, but because the balance of political power in each of its institutions is in flux.

The centre right in the European Parliament is weakening and may divide; Germany’s Chancellor, Angela Merkel, is to step down in 2021; France’s president is seeking profound change and deeper European political integration; while Italy and some eastern states are interested in fundamental reform and a less federal Europe.

This suggests that the Caribbean will need to think strategically about future relations and to cultivate new high-level political interlocutors who have an interest in the region.

As Europe’s High Representative, Federica Mogherini, recently wrote in the Caribbean media, the EU remains a major investor, trade partner, a provider of development assistance and humanitarian relief, believes in dialogue and the peaceful resolution of crises, supports the need to address climate change, and shares the region’s values.

Unfortunately, in recent years and despite the efforts of ambassadors, most Caribbean governments have paid little high-level attention to developing a more strategic relationship with political groups in the Parliament, the council, or the higher reaches of the European Commission, preferring to still see the EU as an aid donor.

It is an impression reinforced by the May 13-14 meeting of Caribbean Foreign Ministers in Grenada.

Despite the recent publication of a European policy paper setting out the breadth of the EU’s vision for its future relations with the Caribbean and Latin America, there was no acknowledgement of its significance or even its existence in the final communiqué. Instead, the most prominent references were to the need for CARICOM ‘to strategically consider its long-term engagement with the US, Venezuela, the post-Brexit trade arrangement with the UK, Cuba, and concern about the EU’s blacklisting of some regional financial jurisdictions.

To be fair, it is possible that foreign ministers may have considered the issue in caucus when they discussed a presentation on ‘Leveraging the Community’s Voice in an Era of Challenge and Disorder’, but this is far from clear.

That said, officials in Brussels continue to stress the EU’s genuine desire to broaden its political dialogue with the Caribbean, observing that a mutually arrived at strategic understanding would add long-term value by offering an approach that is different to that of China and the US.

Common sense suggests that in a rapidly changing world, this is the moment when the region should look over the horizon and recognise that a close political relationship with like-minded groups in Europe’s new Parliament and its sovereign states will in future be as strategically important as its transatlantic relations with the UK, a country which post-Brexit may take a decade or more to stabilise and reinvent itself.