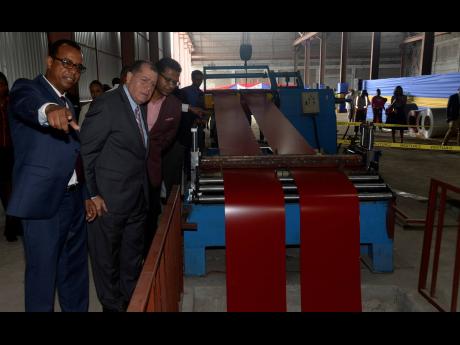 A US$1-million metal slitting plant is now up and running at Arc Manufacturing Limited, which Executive Chairman Norman Horne says is the only one of its kind in Jamaica.

Arc will produce guttering for drainage, roofing tiles, and tracks and studs used in walls and partitions, among other products, from sheet-metal rolled into coils cut from larger imported stock.

“These machines provide us with tremendous fungibility, in that we can take whatever we want from the coils itself. That eases the burden of being over-inventoried on one side while being short in others,” Horne told the Financial Gleaner.

“With that we can better manage the cash flow,” he said.

The two 15-metre-long machines with rolling cutters are capable of slitting metal sheeting into coils of desired widths, which can be further processed. One of the machines produces sheeting at a rate of 90 feet per minute, while the other, a medium-speed set-up installed for redundancy, produces at the rate of 60 feet per minute, Horne said.

He estimates that by doing the slitting in Jamaica, instead of importing from as far as India, the savings to his company could top 70 per cent.

“It costs about US$90 per ton in the overseas market to have the coils pre-cut. To do it in Jamaica is about US$22 per ton. We’re therefore saving US$68, or at least US$60, per ton,” Horne said.

He told a touring party Wednesday that the machines should increase production by about 50 per cent, since the raw material needed for further processing would be more readily available.

Horne also announced that the commissioning of the slitting plant was a prelude to more installations. He noted that two weeks ago, the company installed a machine capable of producing metal fabric for the construction industry. The fabric can be produced in rolls or in sheets made to specifications.

Additionally, Arc Manufacturing will start producing metal hollow section in various sizes within the next two years, he added.