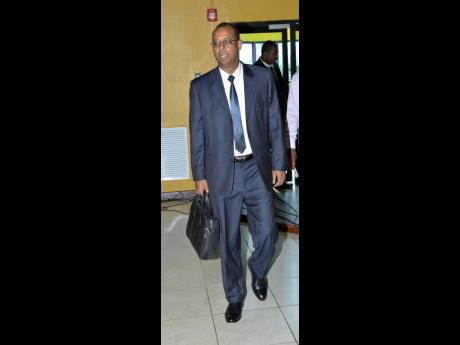 Norman Horne’s hardware distribution company Arc Systems Limited has been placed in receivership for unpaid debts related to construction steel, or rebars, bought from a transport company based in Montego Bay.

The order, handed down in the Insolvency Division of the Supreme Court on Monday by Justice David Batts, also appointed Kenneth Tomlinson as trustee/interim receiver and has given him the go-ahead to take possession of Arc Systems’ properties and track down its assets.

Batts’ order comes behind a lawsuit initiated five years ago in 2014 by Exclusive Holidays of Elegance Limited against Arc Systems for commercial debt related to outstanding payments on an order of steel. Exclusive Holiday won summary judgment against Arc System in the sum of $25.835 million in July 2017, but Horne’s company has failed to pay the debt. Consequently, Exclusive Holiday, a company owned by Montego Bay businessman Fred Smith, applied to the court in March of this year for Arc Systems to be wound up and for Tomlinson to be appointed trustee/receiver.

Tomlinson is one of only nine trustees that have been licensed for receiverships under the new bankruptcy laws.

Batts has given Arc Systems 90 days in which to produce audited financial statements covering the period 2014-2018.

The parties in the case are to report back to the court on June 20.

Court documents indicate that Arc Systems has been experiencing financial difficulties since 2008, and that another company called Atradius Credit Insurance NV had also won an US$8-million court award against it in 2013 that the hardware company said it has been unable to pay.

Arc Systems is one of 17 companies in the Arc Group that founder Horne heads as president and CEO.

Horne told the Financial Gleaner that ARC Systems acted as a trading company and has not done any business for the past seven years.

He said Arc Systems bought 2,000 tonnes of steel from Exclusive Holidays in 2008. But then, he said, conditions in the market changed dramatically. Arc Director Sholton Brown also said in court filings that the fall in prices compounded the company’s financial troubles.

Director of Exclusive Holidays Fred Smith referred requests for comment to his lawyer Winsome Marsh, but she also declined to speak about the case.

In its pleadings to the court in March to have Arc Systems wound up, Smith said Exclusive Holiday had reason to believe that the assets of Arc Systems were being shifted to other associated companies. Arc Systems Director Sholton Brown, who provided a sworn statement to the court dated May 16, said the company “ow[n]ed no property plant nor equipment” and cited it as the reason for not paying the $25.8-million judgment awarded Exclusive Holidays in 2014.

On Monday, Batts ordered Arc Systems to turn over all assets, documents and records in its possession up to July 30, 2014 to the trustee; and gave Tomlinson the go-ahead to track down any Arc assets through whatever investigations he deems necessary, including demanding records from Arc’s associate companies.

Asked whether the case could impact his other companies, the central one being Arc Manufacturing Limited, Horne said the hardware trading company did business in its own right.

Arc Systems’ listed address is 14 Bell Road in Kingston in the heart of the Three Miles industrial belt. Arc Manufacturing, the makers of a range of hardware items, including nails, fencing and roofing, operates from the same complex.

Arc had offered up three alternatives as trustee/receiver for the court’s consideration – Wilfred Baghaloo, Caydain Campbell or Dalma James – but Batts opted to go with Tomlinson, who was Exclusive Holiday’s choice. The four men are among the nine licensed, so far, as trustees to undertake insolvency work.

Tomlinson, who founded and heads Business Recovery Services Limited, told the Financial Gleaner that the case was sensitive and would only be discussed in court.