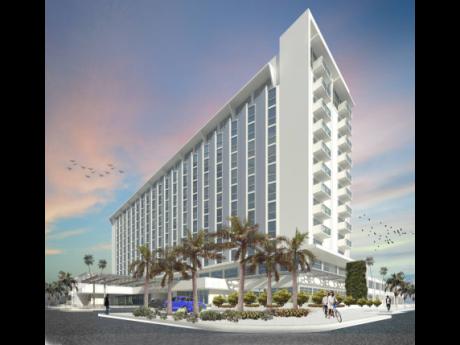 A graphic representation of ROK Kingston.

PanJam Investments has tapped Hilton Hotels to manage its new hotel under development on the waterfront, which it has now named ROK Kingston.

PanJam is in the process of transforming the property that was formerly known as Oceana hotel, which it acquired from the Jamaica-government.

ROK will be a 168-room hotel and is slated to open in March 2020, according to a release from Hilton issued on Tuesday.

The American company, which is now 100 years old, says it will operate ROK Kingston under its Tapestry Collection by Hilton brand, which will mark its debut in the Caribbean. It already operates two Tapestry properties in Peru, which are scheduled to hit the market in 2020.

PanJam and Hilton inked their agreement on Tuesday.

ROK Kingston will feature a “pool deck on its first floor, as well as a fitness centre, lounge area, restaurant, café and bar,” said the Hilton release issued jointly with PanJam.

The former Oceana is a 12-storey building. PanJam has leased the ground floor to state agency the Auditor General’s Department and intends to add retail space and entertainment at the property.