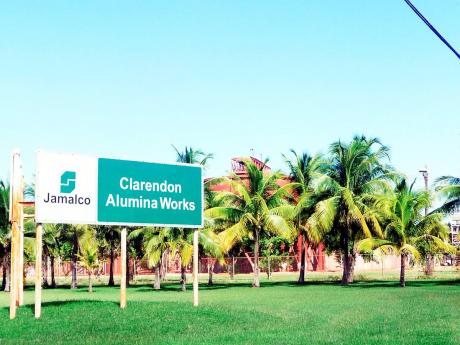 The grounds of the Jamalco refinery at Halse Hall, Clarendon.

Year-old plans to combine Clarendon Alumina Production, CAP, and Jamaica Bauxite Mining Limited and float the merged business on the stock market may have hit a snag related to CAP’s chief asset, Jamalco, which itself was part of a separate restructuring programme.

Noble underwent a US$3.5 billion debt restructuring in late 2018 and shifted assets to a new company.

Nonetheless, the proposal for the CAP-Jamaica Bauxite Mining merger and listing was said by an industry source on Monday to be under review by the Ministry of Finance, whose recommendation would determine whether the divestment of the state bauxite assets would proceed.

Jamalco is a bauxite mining and alumina production operation co-owned by Noble Group, the managing partner with 55 per cent, and CAP with 45 per cent. In fiscal 2018, CAP’s assets were estimated at US$246 million, but this was outweighed by liabilities of US$250 million, according to the auditor general’s report.

Jamaica Bauxite Mining, JBM, holds 51 per cent of mining assets of the bauxite plant in St Ann operated by partner New Day Aluminium, and otherwise operates port facilities in the parish, including Reynolds Pier. JBM’s assets were estimated at $4.6 billion and liabilities at $418 million at year ending March 2019 – numbers that are still subject to audit – according to the latest Public Bodies report that is produced and tabled annually in Parliament by the Ministry of Finance.

In mid-July 2019, Transport and Mining Minister Robert Montague told lawmakers in a sectoral presentation in Parliament that he had given instructions for the merger of CAP and JBM and intended to seek Cabinet’s approval to float the shares on the stock exchange for the average Jamaican to invest in the mining sector.

Although some of the foreign mining and commodities companies that own assets in Jamaica are listed on global markets – including Noble, which trades on the Singapore exchange – the CAP-Jamaica Bauxite tie-up would become the first bauxite operation to list in Jamaica.

CAP Managing Director Winston Hayden redirected requests for comment to the mining ministry, saying the merger was still an issue being dealt with at the policy level.

The finance ministry is yet to respond to requests for comment, and Government’s privatisation agent, the Development Bank of Jamaica, says it has received no instructions regarding the CAP-JBM privatisation.

Noble Group manages a portfolio of global commodities covering industrial and energy products, with Jamalco being it’s only known Jamaican investment. Chairman of Jamalco Will Randall said CAP and Noble had a shared goal of making the refinery the “national alumina/bauxite champion” for Jamaica, and that Noble was itself focused on finalising its reorganisation this year, but otherwise had no comment on the CAP merger and listing.

The Jamalco bauxite mines are located in South Manchester on the Mount Oliphant plateau and in Harmons Valley. The alumina refinery located at Halse Hall in Clarendon was last upgraded in 2007 to its current capacity of 1.425 million tonnes.

Noble describes Jamalco as one of its best-performing assets. In November 2018 it was announced that the Noble Group was moving its stake in Jamalco, along with other non-core assets, to a new subsidiary as part of a restructuring plan to turn around the loss-making company. The group would operate under two main entities: a new asset company, which would hold investments such as Jamalco; and a trading company for the group’s core businesses.

Noble shareholders were allocated a 20 per cent stake in New Noble, senior creditors got 70 per cent, and management the remaining 10 per cent. New Noble, meanwhile, had access to US$800 million of debt facilities.

In its first-quarter earnings report for 2019, the new Noble Asset Company Group said it benefited from Jamalco’s performance due to strong world alumina prices. Asset Company reported operating income of US$24 million in the quarter and 2 million tonnes of alumina shipments from Jamalco and other operations.

Its net debt in March stood at US$655 million and the 55 per cent stake in Jamalco was listed as one of several guarantors for senior secured debt.